The Canadian bit torrent site and Geist darling Isohunt was found in 2010 to be a copyright infringer in no uncertain terms (probably because they are clearly a massive and intentional infringer).  According to the Financial Post:

On Thursday, U.S. District Court Judge Stephen Wilson in Los Angeles issued a permanent enjoinment against Gary Fung, the Richmond, B.C. owner of Isohunt, one of the largest BitTorrent search engines on the Internet.

The ruling comes as a result of a lawsuit launched against the Canadian Website several years ago by the Motion Picture Association of America, the group which represents the biggest movie studios in Hollywood.

According to yesterday’s judgment, Judge Wilson decided to permanently enjoin Isohunt and the 27-year-old Mr. Fung from continuing to engage in copyright infringement because the MPAA “have demonstrated that they have suffered irreparable harm, and would suffer further irreparable harm from Defendants’ continued infringement.”

As a result, Mr. Fung now could face possible jail time for not complying with the judge’s order.

Back in March, Judge Wilson ordered Isohunt to remove links to any copyright infringing content from its Website. However, a quick look at the Isohunt Website today shows that it still links to copyrighted movies, music files and video games.

Judge Wilson’s ruling on March 31 came almost exactly one year after a Swedish court issued a similar ruling against The Pirate Bay, the world’s largest BitTorrent search engine and one of the most popular sites on the Internet.

So how is Isohunt doing these days?  Isohunt apparently has no shortage of advertising.  These ads targeted at Isohunt’s young demographic are right alongside a hacker staple, advertising for RussianBrides.com and other “mail order brides” sites, a type of website frequently associated with human trafficking. 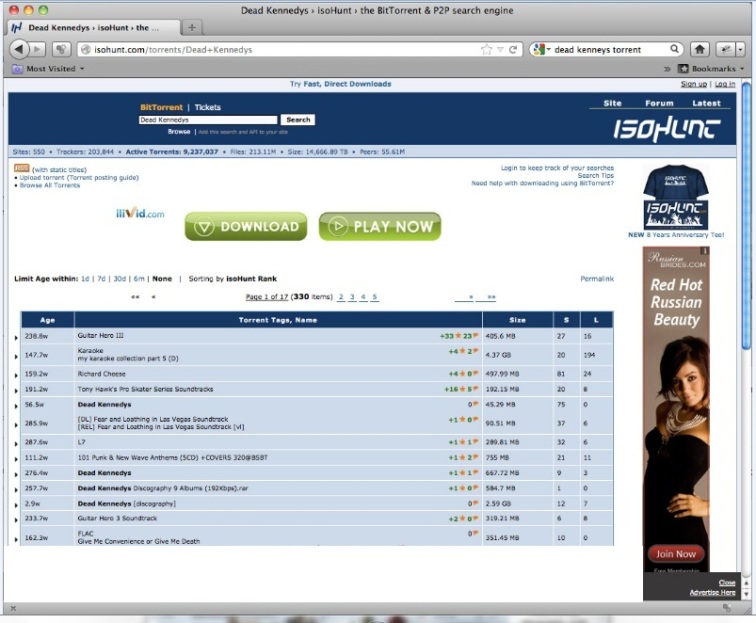 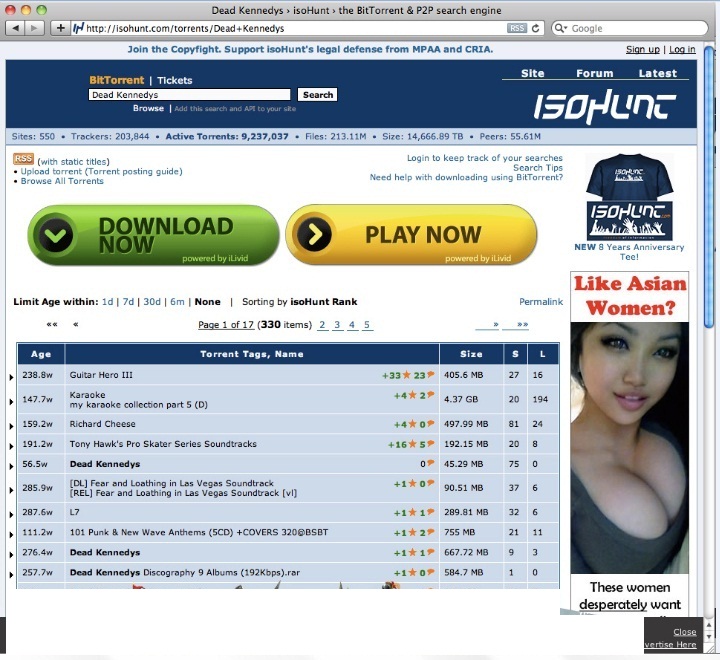 So in addition to page after page of the kind of infringing content for which Isohunt has been found liable, you have videogame companies and mail order brides sites supporting Isohunt’s “Eighth Anniversary”, all from the copyright infringement Temporary Autonomous Zone, happily stealing from artists and benefiting from human misery around the planet in the name of “free expression” and “search neutrality”.

Just like Google, right?  Isn’t that how these pirate sites defend themselves?  We all know that Google is the primary search tool for finding infringing content on the Internet if the carefully crafted Google “Transparancy Report” is any guide.  And Google also has been criticized as a leader in profiting from human trafficking ads, too, just like baby brother Isohunt.  Even the search term “women” brings up paid ads for “Single Ukraine Ladies”:

Not to mention the sketchy paid Google ads for a search on “Nashville mail order brides”:

Two Members of the U.S. Congress wrote a bipartisan but still-unanswered letter to Google CEO Larry Page earlier this year asking for Google’s help in stopping Google’s lucrative human trafficking advertising.  (This is along the lines of the letter that 19 U.S. Senators signed to the Village Voice to encourage them to stop carrying lucrative human trafficking ads in Backpages.com.)

Maybe Canadian Members of Parliament might do the same for Isohunt?

2 thoughts on “Isohunt: Bringing People Together on the Wall of Shame”