As we have written before on MTP, brand sponsored piracy is the act of brands selling advertising on pirate sites.  Top brands like Fortune 500 brands.  This is what we have called the “unholy alliance”–the big search engines…ahem…drive traffic to pirate sites where they also have advertising publisher arrangements.  If you notice the carefully worded non-denial denials from Google and Yahoo! in reaction to the USC-Annenberg Innovation Lab’s first Transparency Report, you will begin to understand why some in the online advertising space call Google “The Paymaster of the Internet”.

If true, this raises an interesting question–however “complicated” it all is, somebody somewhere is supposed to be sending IRS Form 1099s to all whom they pay.  Otherwise, there are vast, undeclared sums of money being funneled to God knows whom.  If you believe the Electronic Frontier Foundation and Jimbo Wales, these are just kids in their bedrooms doing a little linking.  If you believe your eyes, these is a corrupt network participating in a herd of organizations dedicated to offering a variety of infringing works, including copyrights and design rip offs, drugs (both prescription and counterfeit), and “RUSSIAN GIRLS ARE DYING TO MEET YOU”.  Perhaps literally.  And while they may give away the music and movies for free to the end user, the site supports itself with advertising and subscriptions.

The net result is that there is a massive amount of money changing hands from brands serving advertising to pirate site ad publishers.  We know the money starts with the brand and ends with the pirate.  What happens in between the brand and the pirate is not really our concern–that is important to the Internal Revenue Service and the Federal Bureau of Investigation in the US, or Inland Revenue and the Serious Organised Crime Agency in the UK.  But what becomes very clear is that these ad networks are spokes in a wheel of corruption, heavily influenced by a criminal organization.  You know–a Racketeer Influenced Corrupt Organization.  Which on top of everything else may be engaged in tax evasion on a grand scale.

But the good news is that a lot of this information is the kind of thing that guys with badges and warrants are good at finding.

Adding Insult to Injury:  Brands that Advertise on Awards Shows and on Pirate Sites

In a recent post, How We Could Really “Thank the @goldenglobes”, @nbc, @tinafey123 and Amy Poehler: Should creator awards shows refuse ads from brands that sponsor piracy? we raised the question of whether it was appropriate for ads who want to get the big audience that the big awards shows can bring to be allowed to advertise on those shows if they also participate in brand sponsored piracy, knowingly or unknowingly.  The Trichordist noted that the Golden Globes sold television advertising by brands that also sold advertising on pirate sites offering black market copies of Adele’s music.  These included AT&T, American Express, Target and Nissan–but perhaps most gallingly, British Airways.

British Airways–the flag carrier of the United Kingdom, sponsor of the 2012 Olympics, trying to have it both ways just to get that audience that pop culture can deliver like no other.  And they don’t care that they are ripping off another British icon–Adele.  Not to mention Adele’s UK indie label XL, and icon in its own right.

No, to add insult to injury–British Airways, flipping British freaking Airways bloody wants to dance on their graves and sell tickets to the Googleization of copyright in real time.

This really is “not on” as the Brits might say.  It’s very Googlely, but not very British.

It is just unfair, and it needs to stop.  Or be stopped. 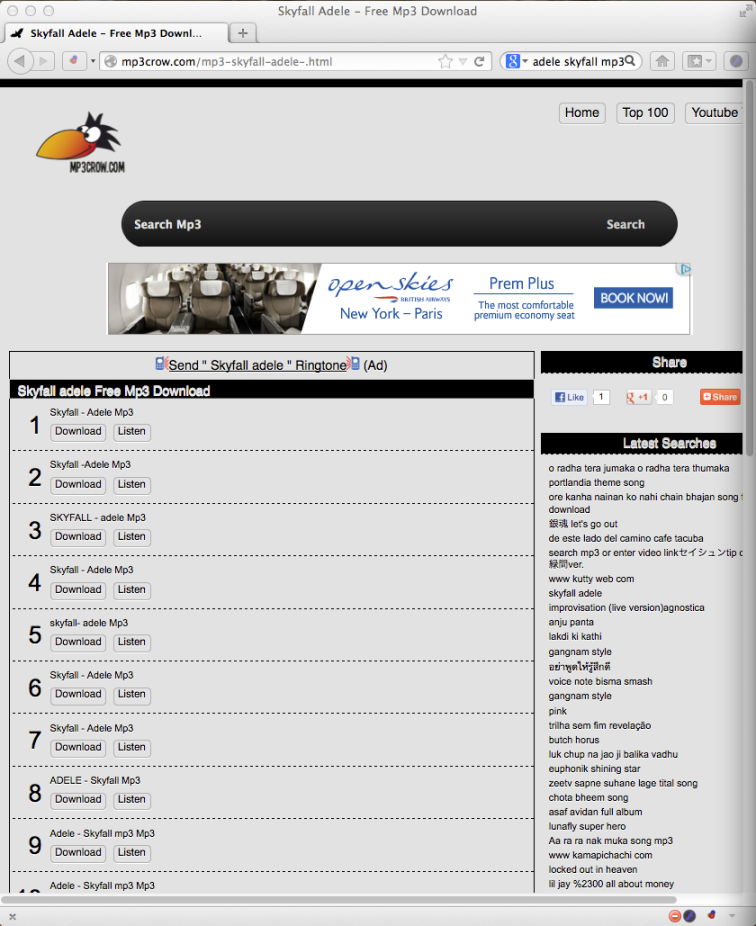