As anyone knows who has dealt with YouTube, the much ballyhooed Content ID database really is horrendous.   This is particularly true on the music publishing side.  And of course, Google uses its market power to refuse the industry standard audit right to independent songwriters–you know, those songwriters who are subject to compulsory mechanical licenses and whose performance royalties are subject to government oversight.  To protect Google from the antitrust lusting of songwriters.

Witness the typical Google royalty statements which many of the songwriters and publishers among you received recently.  That statement comes with a cover letter asking the songwriters to fix Google’s skanky data: 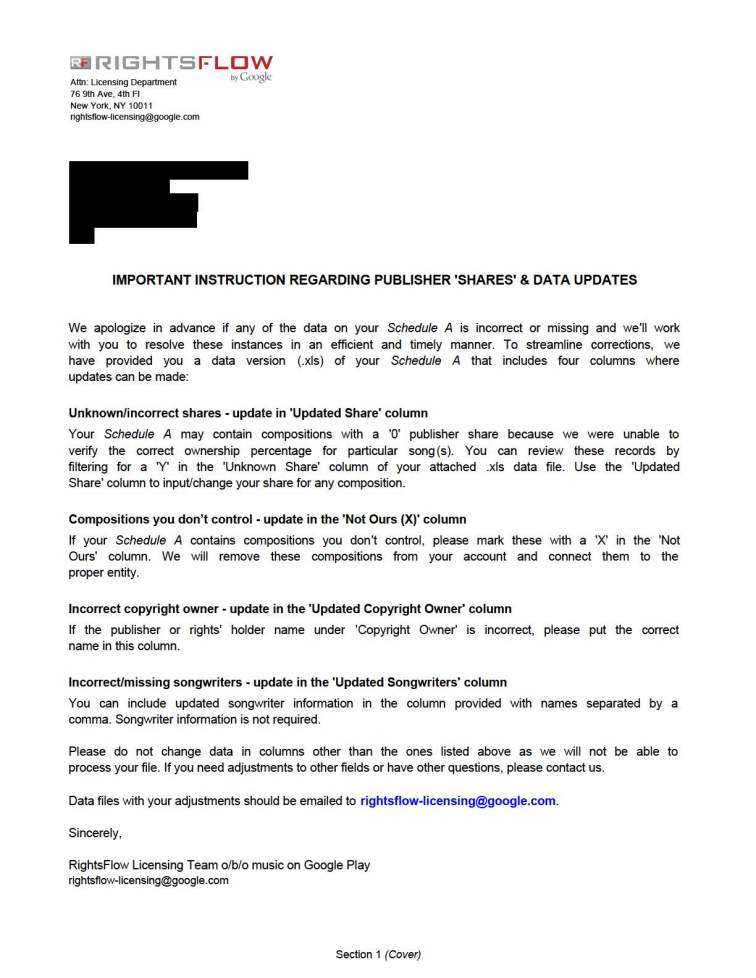 As you can read for yourself, Google is asking that the music publishers and songwriters to fix their data–essentially to act as “mechanical turks” to crowdsource the job of building an asset for Google.  This is the usual Google-style shakedown.  Build a monopoly on the video search vertical that they subsidized for years with monopoly revenues from their advertising business (now the subject of another major antitrust investigation by the Federal Trade Commission).  Then strongarm artists and songwriters into “DMCA licenses” (which, of course, are no licenses at all and are dependent on scaring rights holders with a bottomless litigation budget Google raises in the public markets).  Then get artists and songwriters to “fix” the bad data for free and offload transaction costs onto music publishers.

What do you suppose they intend to do with that asset if it’s ever fixed?

Replace the PROs who are forced to operate under an FTC consent decree–the same FTC that gave Google a pass on violations of the antitrust laws.

So Google could try to operate a new PRO without the constraints of the consent decree that current PROs are subject to.