I participated on a panel at the 2013 USC Institute on Entertainment Law and Business on October 5 in Los Angeles.  The topic was the erosion of copyright, not just through a lack of enforcement, but through permissive misinterpretation of the intentions of Congress.

My presentation was based on the briefing on brand sponsored piracy that I gave to the National Association of Attorneys General earlier this year (which you can see here).  A caveat–while I discuss only Google here, these problems are not limited to Google alone.  However, since Google is a monopolist in both search and online advertising, the difference between what Google does and others do while measurable is unlikely to be statistically significant.

The argument is that due to an extraordinarily distorted interpretation of the “safe harbors” created with the best of intentions by the Congress in 1998 (the so-called “DMCA notice and takedown”), the value of copyright not only is eroded, but an–illegal–multi-billion dollar business has evolved. The DMCA has, in effect, fostered one of the greatest income transfers of all time (as brilliantly described in detail by high tech guru Jaron Lanier in his new book, Who Owns the Future?“)

Sites that are in the top 500 most-noticed sites according to Google make substantially the same music and movies available (sometimes identical titles) as licensed sites.  Mainstream ad exchanges and networks (such as Google’s Adsense and Doubleclick and Yahoo!’s Right Media) serve mainstream advertising to these illegal sites. 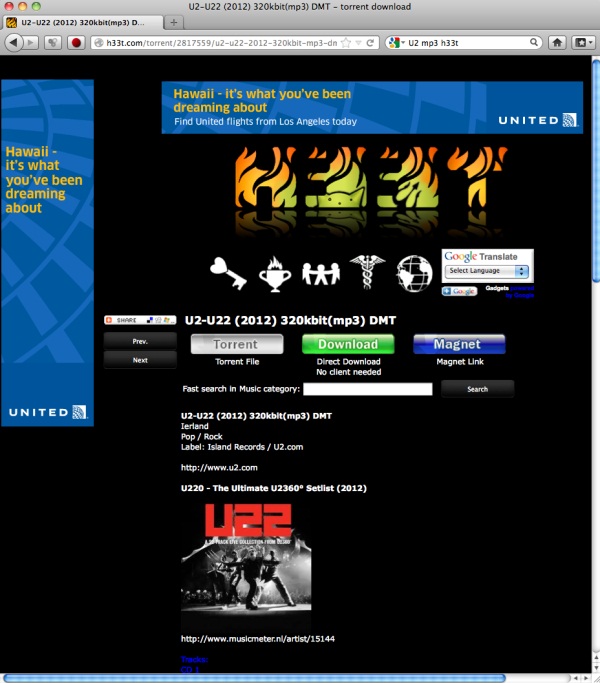 The DMCA notice and takedown procedure allows the illegal site to throw up the smokescreen of the DMCA procedure to avoid liability and generally create confusion.  In addition to eroding the value of copyright because the interpretation of the DMCA by these illegal sites makes them difficult to stop, the fact that illegal sites continue to operate also means that they continue to make money for unscrupulous advertising networks such as Google Adsense.

Because Google is also a major media company that competes with the producers of the media that is being stolen by these pirate sites that are financed in part by Google, it is easy to see how perpetuating Google’s extreme interpretation of the DMCA is actually a competitive advantage to Google in the legitimate side of its business, such as Google Play.  (Or, as it’s known in some circles, the Genco Pura Olive Oil Company 2.0.)

The availability of pirate sites that are monetized by Google generally drives down the value of creative work, and certainly libraries of movies and music.  By transferring some of the library value of the corpus of recorded music and movies from artists and copyright owners to Google, the legitimate side of Google’s business can demand lower pricing.  The lower price is in essence based on the “new new valuation”—because a license for a song is not exactly an appreciating asset in a world where the laws that were designed to protect copyright owners, particularly individuals who own their own copyrights, are bastardized by some of the wealthiest companies in the world.

Google’s search engine drives traffic to the pirate sites to which its ad network serves advertising, often for legitimate brands.  It is a measurement of how profitable this unholy alliance is that Google will try to say that the 20 million DMCA notices it receives each month is somehow evidence that there’s something wrong with copyright rather than there’s something wrong with Google.

If someone tells you that there’s something wrong with your product 20 million times a month, maybe there is.  Particularly when the flaw results in harm to innocent people.  (Often called a design defect.)

As Google wrote in its Hotfile amicus brief in support of the losing argument:

The statute provides benefits to both sides. It offers service providers broad protection against infringement claims, along with express assurance that they need not monitor their services or affirmatively seek facts indicating infringing activity (§ 512(m)(1)). In turn, the DMCA gave copyright owners new remedies against online infringement, including an expedited “notice-and-takedown” procedure(§ 512(c)(1)(C)), as well as the power to issue subpoenas directly to service providers requiring them to identify infringing users (§ 512(h)).

Google’s “Transparency Report” documents that Google receives approximately 20 million takedown notices a month, many of which are for links in Google search results that drives traffic to pirate sites where Google sells advertising, the value of which is largely based on the amount of traffic that sees or clicks on the ads.

This is how the unholy alliance of search, advertising and pirate sites is based in the misuse of the DMCA notice and takedown provisions that inadvertently created the “whack a mole” battle space that is the hallmark of creators decade long brush with “innovation”.

And, oh, yes, any criticism or interpretation of the DMCA that would cut back the millions and perhaps billions that Google makes from the unholy alliance is met with much wringing of hands about “stifling innovation”:

Google is fond of this kind of statement, repeated in its brief in support of Hotfile:

Of course, what Google omits is that the Congress meant to say “the variety and quality of lawful services” would grow.  Google can’t care much about that distinction because if they did, they would cut themselves off from significant advertising revenue.

Google’s Adsense and Doubleclick services offer brands the opportunity to get their advertising in front of the valuable audience attracted to music and movies.  Google does this in two ways:  First, by serving ads to the pirate sites that steal this content.  It is important to understand that for Google and the pirates, no sale is a lost sale because all sales are monetized and they split the illegal revenue.

Whether Google declares the payments and the pirates pay their taxes remains to be seen (and is a good reason for keeping the Megavideo case from proceeding because the tax issue will be squarely before that court).

The other way that Google satisfies brands is by serving advertising to legitimate sites or services offering music and movies including its own YouTube and Google Play platforms.

As anyone who has negotiated with Google’s music licensing group can tell you, Google starts with the attitude that the fact that they are paying anything for music or movies is somehow a concession and a gift. In other words–they negotiate like a monopolist.  Because they are.

In fact–our business very likely starts in the red at a negative royalty after taking into account the transaction cost as an industry of sending 20 million takedown notices every month, staff time spent correcting the horrendously inaccurate Content ID and Google Books metadata and accounting for fractions of fractions of a penny per play paid from an unknowable amount of revenue from advertising that is as transparent as the Mariana Trench.  (See, e.g., Google’s Book Search: A Disaster for Scholars.)

And this is not to mention the lost royalty income from advertising on pirate sites that is never included in the Google Play royalty accountings–even though every sale is monetized.

How Valuable are 46,000 Adsense Accounts?

Google acknowledges in its recent “How Google Fights Piracy” report that it has voluntarily terminated Adsense publisher accounts (at p. 24):

In 2012, Google disabled ad serving to 46,000 sites for violating our policies prohibiting the placement of ads on sites with infringing content, the vast majority being violations Google detected before we were notified.

What Google does not say is how long were these “sites” operational, how much money Google made from selling advertising on these sites, and what Google is going to do with the money that it made before the accounts were terminated.

If we assume that Google made a modest average of $10,000 on each of these terminated accounts—a very conservative estimate—then the 46,000 accounts that Google terminated brought $460,000,000 to Google.

Bear in mind that Google paid a $500,000,000 fine to the State of Rhode Island and the U.S. Government in a settlement for promoting the sale of drugs in violation of the Controlled Substances Act.

So if Google made $460,000,000 from the accounts that it terminated and if Google retains approximately 40% of the gross revenues from ad sales, then the total amount generated–just by these terminated accounts–was $1,150,000,000.

If these assumptions are even in the ballpark, we are talking over a billion dollars extracted from brands and split between Google and pirates in a world where all sales are monetized.  (And if these assumptions are incorrect, I look forward to that demonstration from Google’s disclosure of exactly how much money they made, who they paid it to and how much they kept for themselves–because they kept something.  Google’s demonstrated practice is to shut off the account, keep the money and promise not to do it again.)

Google established the precedent in its prosecution for promoting illegal drug sales of paying the relevant state and federal government agencies a compensatory number reflecting the gross sums made by both the offending advertiser and by Google itself.  And remember—in the drug case, people died.

In the case of terminated Adsense accounts, what should happen to the money that Google made—mistakenly or intentionally.  The standard that Google wants to impose on the world is that when you profit from crime, you can keep your money if you promise not to do it again.

That never has been the law, is not the law now, and is highly unlikely to be the law in the future.

It is simply impossible to believe that it was ever the intention of the drafters of the DMCA that they intended the safe harbor to produce over 20 million takedown notices a month to a single offender.

Based on a tortured interpretation of the DMCA that pirates are only too happy to perpetuate, Google has established what appears to be a phenomenal business in duping brands into selling advertising on pirate sites.  The problem is that this was not the kind of innovation the Congress intended to encourage.

Lest it be lost in the vast scale of DMCA notices, one of the reasons that the Congress established the notice and takedown procedure was to provide individual artists who own their copyrights with a way to protect themselves against the gigantic ISPs and search engines.  The idea was to protect the little guy.

The Congress, however naively, assumed that the profit motive would not eclipse any sense of decency in these mega corporations.  Boy, were they wrong.

Google is prepared to back up this “catch me if you can” approach to the law with endless amounts of their stockholders money for litigation that only the richest copyright owners can sustain.  This frustrates yet another aspect of Congressional intent.

First, when their work is stolen and distributed by pirates.

Second, when companies like Google drive traffic to pirate sites where they sell advertising, profit from that sale until the pirate is caught, and then pocket the money after they terminate the Adsense account (and probably set up a new account in the best traditions of whack a mole).

These follow on effects all start with the absurd—but abiding—interpretation of the DMCA that allows the farce to continue.