“Now I am become Death, the destroyer of worlds.”

If you don’t remember Tim Quirk, he’s one of Google’s big evangelistas–not quite important enough to make the Google Shill List (although there’s time for that) but he’s part of what I call the Dave Allen Brigades.  You know these people, you’ve seen them in restaurants–“Bitter, table for one?”

I don’t know the guy, but based on his very public statements his latest obsession appears to be trying to tell people who expect to be paid a royalty that somehow they are fetishizing the past.  Wait–an obsession about fetishes…

For example, Quirk was featured at Google’s Nashville Charm Offensive organized by Google’s Man in Nashville, Mark Mongomery.  To wit, “Google to Nashville’s Music Biz: Don’t Fetishize the Past”

Tim Quirk, head of Android global content programming, had two takeaways for a room filled with people from Nashville’s music business at Thursday’s Google for Creators event: “Don’t fetishize the past,” and “music is priceless.”

He pointed to an article in The New Yorker that highlighted a writer’s nostalgia for record shops and obstacles posed by on-demand music. While Quirk said he is frustrated when people glorify the way things used to be, he also said music cannot be devalued and pointed to a shifting model in the music industry that can lead to opportunity.

When you work for the biggest advertising company in the world, don’t be surprised if people think that phrases like “Don’t fetishize the past” and “music is priceless” are the product of many focus groups.  You should also not be surprised if these odd little phrases are part of Quirk’s stump speech, no doubt approved at the highest levels of the Google aristocracy.

Quirk spoke at the Future of Music Policy Summit thingy in DC this week–unlike last year, the Google domination was limited to one sponsorship credit for Rightsflow–an unincorporated division of Google’s version of the Genco Pura Olive Oil Company 2.0.  One sponsor credit, but we have no idea how much money.  Although Google prominently sponsored the “Future of Music Honors” event so who knows.  Here’s a tip–don’t ever give a sponsor a bigger credit than you get yourself.  Someone might think that you’d been commoditized. 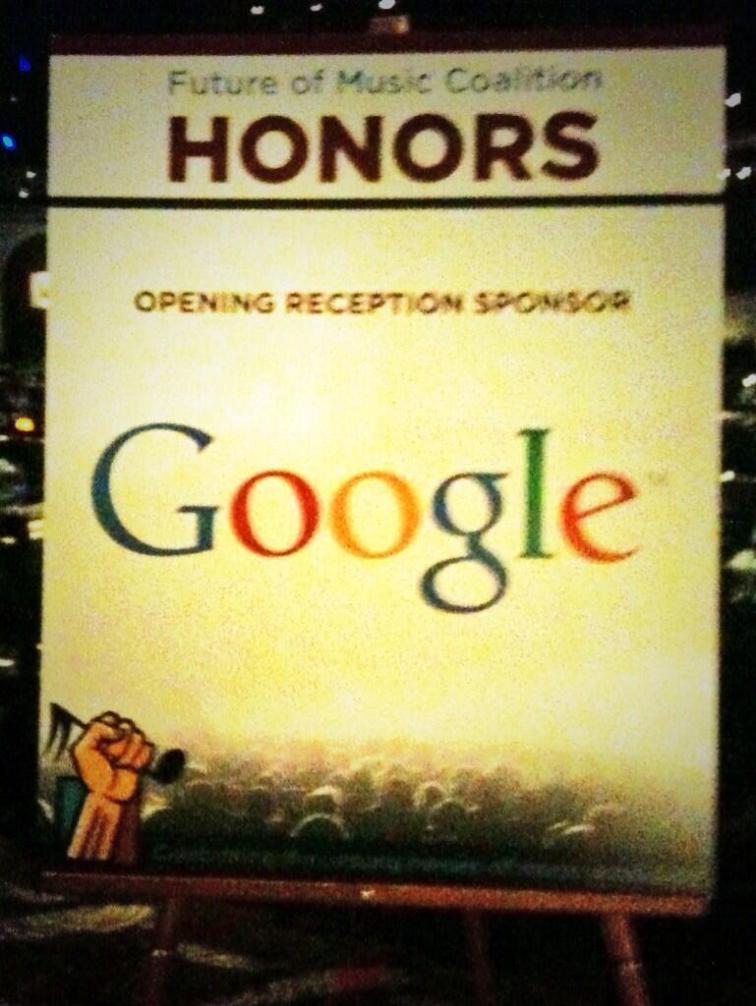 Quirk’s speech was a repeat of his insulting presentation in Nashville–you know, kind of obsessive, compulsive repetition–oh, wait, that would be like a fetish.  Well, I’ll have to think of something else to call it.

[B]efore I spout some of [my own] opinions, I wanna start with one I don’t share.

It’s a typical and to me typically depressing reaction to the recent explosion of online music services. A blogger for The New Yorker posted something last year that made me sadder and sadder each time I saw someone retweeting it approvingly.  It was supposedly about the tyranny of choice and how on-demand music services have made it harder to fall in love with music by making it too easy to listen to anything you feel like.  But the piece was really about how much fun the writer used to have spending hours in record shops that are now closed, hunting for LPs he could take home and slowly fall in love with, and how much he misses the experience.

In other words, it was soaked in nostalgia. If the writer were 80, I’d give him a pass, but I’m pretty sure he’s younger than me, so fuck him.  I mean that.

I’ve been spending more time and money than I could afford in record shops since Jimmy Carter was president.  And I’ve been getting paid to figure out what aspects of that experience can and can’t be replicated online since Bill Clinton was getting impeached.  And you know what that means?  It means I’m old.  That doesn’t mean I don’t consider my experience important; it is.

If nothing else, it’s convinced me of one invaluable rule that everything else I’ll say today flows from: Don’t fetishize the past.

It’s amazing how often people invoke that word ‘devalue’ as if it means something.  It doesn’t.  You know why?

Now this is interesting.  Google wants you to believe this very, very much, or else Quirk would not be repeating it whenever he can.

This reminds me of a deposition I attended for the owner of a stable that specialized in Arabian horses.  My guy had stabled his Arabians there and they’d all died–needlessly.  The stable owner was so deep in liability that he was willing to say just about anything–“You know a horse is a beautiful thing.  Priceless.  So hard to put a value on.  So let’s not.”

That’s the only time I ever had to stop someone from coming over the table to strangle the other side.

Quirk is creating an obfuscation–Google’s mission, its business model, is in fact commoditization and devaluation.  Of other people’s stuff.  As intellectual property policy guru Jim De Long wrote (in “Google the Destroyer“):

Google is unusual because of the large number of products and services that can be complements to the search function, including basic production of content and its distribution, along with anything else that can be used to gather eyeballs for advertising. Google’s incentives to reduce the costs of complements so as to harvest more eyeballs to view advertising are immense….In most circumstances, the commoditizer’s goal is restrained by knowledge that enough money must be left in the system to support the creation of the complements….

Google is in a different position. Its major complements already exist, and it need not worry in the short term about continuing the flow. For content, we have decades of music and movies that can be digitized and then distributed, with advertising attached [illegally or legally, they don’t care which]. A wealth of other works await digitizing – books, maps, visual arts, and so on. If these run out, Google and other Internet companies have hit on the concept of user-generated content and social networks, in which the users are sold to each other, with yet more advertising attached….

The Elephant in the Room Fetish

Perhaps the most repetitive denial that is the most necessary part of Google’s unifying ideology is never mentioning how much Google makes from selling advertising on pirate sites to which it drives traffic.  Quirk never mentions this fact.  For example, in his Future of Music speech he tells us:

Imposing order on chaos is particularly important at the bottom of the pyramid, [which] [sic] I’ve labeled that the free tier.  And it’s true, that’s where unlicensed peer-to-peer services operate.  But free in this context doesn’t have to mean copyright owners aren’t making money, it just means the listeners themselves aren’t paying.  The free tier of Spotify lives here, as does YouTube, sites like Last.fm, Pandora, broadcast radio, NPR’s music website and numerous other music discovery blogs.

This guy managed to get through his entire speech and not once mention that the “unlicensed peer-to-peer” services are monetized by Google.  There are no lost sales on these ad supported services–all sales are monetized.  So while those licensed services he lists are in the “free” tier, so are the 46,000 illegal sites that Google acknowledges disconnecting from Adsense.

But you see, expecting to be compensated for Google’s profit from piracy is just fetishizing the past.  And fetishes are not to be discussed in polite company.

Even if Google has left you gasping like a fish on a beach.