Mississippi Attorney General Jim Hood just scored a major victory for Mississippians in the U.S. Supreme Court.  So we should not be surprised that as he determinedly pursues Google for continuing to sell drug advertising online and a variety of other consumer fraud and unfair business practice claims, Google continues to dance around their bad acts on many other issues of concern to creators.  Remember, this is a company whose CEO was implored by former Health and Human Services Secretary Joseph A. Califano, Jr. to stop selling drugs to kids…a Google profit center that lead directly to Google paying a $500,000,000 fine to the U.S. Department of Justice a few years later.

So if they’ll do that, what’s a little copyright infringement?

In a bizarre twist that has many wondering about how this came to pa$$, Google’s General Counsel, Kent Walker, is keynoting the Grammy Entertainment Law Initiative during Grammy Week.  [Updated: Note that as of yesterday, Mr. Walker is no longer keynoting the ELI and Mr. Kyncl will cover Google’s $pot.  It would not be surprising if Mr. Kyncl’s remit is to] try to tell the assembled music lawyers how Google is doing so much to help them and that their clients really need to just shut up and sing.

Google leads the pack in litigating artist issues into the ground.  Such as trying to destroy the ability of authors to sue as a class in the Google Books case (courtesy of Google’s go to lawyer for artist destruction, Daralyn Durie, who now represents Goldieblox against the Beastie Boys and whose firm may be representing Silicon Valley darling Rap Genius).

So there is a tragic irony here–why would it seem appropriate for a senior representative of the only company in the history of the United States to pay a $500,000,000 fine for violations of the Controlled Substances Act speaking at an organization devoted to helping musicians and artists, including the fine work of NARAS’s Musicares in helping with substance abuse that Google promotes on YouTube.

As I highlighted in a recent Billboard op-ed, Google demonstrated with its treatment of Rap Genius that it can demote any site it deems to be a bad actor anytime it wants.  Particularly when that site is not (yet) a Google Adsense publisher.  So with these things in mind, here are Google’s Four Big Lies, as told to you by Kent Walker from the Google Public Policy Blog.

What you will notice is that there is one issue running through all of Google’s massive problems–Google products cater to bad actors but refuse to keep the bad guys out in order to appease the great god Scale.  And the great god Scale is also known as Greed.

Acting on reliable copyright takedown requests within 24 hours [for bad actors that Google already allowed into its products]. We promised to build tools to make it easier for rightsholders to submit DMCA takedown requests for Google products (starting with Blogger and Web Search), and to reduce our average response time to 24 hours or less for submissions using these new tools. We built the tools earlier this year, and they are now being successfully used by more than a dozen content industry partners who together account for more than 75% of all URLs submitted in DMCA takedowns for Web Search. Our response time for these partners is now well below the 24 hour target. In the coming months, we will be making these tools available more broadly to those who have established a track record of submitting valid takedown requests.

The IFPI recently announced that as of a few weeks ago, sound recording copyright owners had sent 100 million takedown notices to Google for search alone.  The total number of takedown notices that Google averages 20 million a month (from search alone–not including Blogger or YouTube)–over 23,000,000 in the last month as of today: 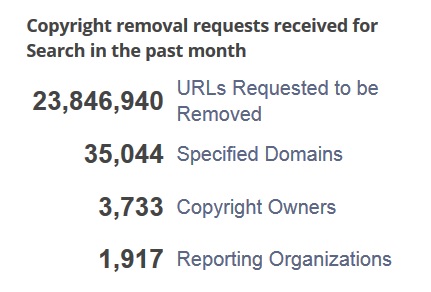 When someone tells you over 20 million times a month that your product is defective, do you think that maybe there’s something wrong with the product?  Not to mention the fact that Google continually gets tens of thousands of takedown notices for the same song on the same site but allows that site to have the reposted infringing file re-indexed by Google and made available to consumers–fraudulently, in my view.

Google’s drug ad policy is not that different than it was in 2008 when Secretary Califano wrote to Eric Schmidt (after paying $500,000,000 to the government to avoid their senior management team being indicted):

You can read the full letter here, not to worry, Schmidt never responded.

Improving our AdSense anti-piracy review [for ad publishers already in the system]. We have always prohibited the use of our AdSense program on web pages that provide infringing materials, and we routinely terminate publishers who violate our policies. In recent months, we have worked hard to improve our internal enforcement procedures. In April, we were among the first companies to certify compliance in the Interactive Advertising Bureau’s (IAB’s) Quality Assurance Certification program, through which participating advertising companies will take steps to enhance buyer control over the placement and context of advertising and build brand safety. In addition, we have invited rightsholder associations to identify their top priority sites for immediate review, and have acted on those tips when we have received them.

What’s wrong with this statement is in the idea that Google allows Google has announced that it disabled ad serving to 46,000 accounts for violating ad policies. Google fails to answer three key questions:  How much money was involved in these 46,000 accounts; where did Google’s profit for the sites go after the site was “disabled” and what does “disabled” mean?  Were these sites from the long tail such that the revenue derived was insignificant or were the disabled sites producing millions or even hundreds of millions so disabling them actually  hurt? Were the sites allowed to sign up again under a different name and continue making money for Google?

According to USA Today,  “[b]y the end of 2013, Google had blacklisted more than 200,000 publisher sites in its ad network and removed more than 250,000 publisher accounts for violations such as artificially inflating clicks and impressions or including ads on sites with violent content.”  Once again–how did these ad publishers get into Google’s products in the first place?  Because it profits Google to let them in and monetize them until someone catches them.

Improving visibility of authorized preview content in search results. We have launched Music Rich Snippets, which allow legitimate music sites to highlight content in the snippets that appear in Google’s Web Search results. Rhapsody and MySpace are among the first to implement this feature, which has been developed using open web markup standards, and we are looking forward to more sites and search engines marking up their pages. We hope that authorized music sites will take advantage of Music Rich Snippets to make their preview content stand out in search results.

Note the careful wording:  Improving the visibility of authorized preview content.”  This last of the Big Lies completely dodges the issue–Google drives traffic to pirate sites all day every day with search terms that only bring up unlicensed sites:

Not only does Google promote pirate sites for albums, but it also pushes traffic to the entire JayZ discography:

And Torrentz.eu is easily found in the Google Transparency Report:

So Mr. Walker can’t say he doesn’t know that his company is ripping off artists–in JayZ’s case Google has been notified nearly 3 million ties in the last year.

But here’s a question for Mr. Walker:  Why doesn’t Google ever talk about the company’s utter shambolic failure to control YouTube–you know, the YouTube that’s being piped into your house right now over Internet enabled devices, that is used as a honeypot for your children through Google’s educational devices, and that thinks they are going to compete with the Grammy Awards with the YouTube award show, all the while monetizing videos like this:

Google’s problems all come down to the same thing:  Google monetizes bad behavior at scale.  They don’t want to stop it because they make too much money doing it.  Remember–when Google got caught advertising counterfeit Olympics tickets, they told the BBC that Google was keeping the money.  Note–this is both the share that Google would have made as its vig AND the bad guy’s share.   Google says they stopped 3 million “bad ads”.  What happened to the bad guy’s share of revenue, or Google’s for that matter?  It probably ended up in Google’s bank account.  That question never seems to come up.

Does Google get to keep all the money when it finds out that one of its customers is violating Google’s terms of use?  That’s quite a moral hazard.

This is nice work if you can get it–let the bad guys in, discover the shocking news that there are bad guys in the system, cut them off and keep the money.
And this is just the stuff we know about.