Some interesting points were made by the Committee and the witnesses at Tuesday’s (Jan 26) hearing before the House Judiciary’s Subcommittee on Courts, Intellectual Property, and the Internet on “The Scope of Fair Use”.  One high point for me was that the Chairman only had to gavel Professor Jaszi a single time.  I guess the red light shall not be remixed.

One witness was Naomi Novik, an author who started out her career writing “fan fiction” and who has now–like a Horatio Alger newsboy–risen to writing the Temeraire franchise that she said had been optioned by Peter Jackson.  This is what is sometimes called a story of ascendancy, as old as the American Dream, but this time with dragon dolls and merchandising rights.  I’ll refer to Ms. Novik’s Temeraire franchise as “science fiction” although that’s probably off by a subgenre or five.  It’s really not my area.

Ms. Novik focused almost entirely on the non-commericial aspect of creating fan fiction, but creation that is closely integrated into the Internet.

In 1994, while I was still in college, I first came across the online remix community. Over the next decade, before I wrote one word of my first novel, I wrote fanfiction, built online computer games, wrote open­source archiving software, and created remix videos. I met hundreds of other artists creating their own work, and found an enthusiastic audience who gave feedback and advice and help.

I had no money for licenses or lawyers. Neither did my fellow artists. No one would have sold us one anyway. We weren’t trying to make money off our work. We were gathering around a campfire to sing and tell stories with our friends. The campfire was just a bigger one, and instead of telling new stories about Robin Hood, we told new stories about Captain Picard, because that was who we saw on television every week.

In a certain unintended irony, while Ms. Novik was using Captain Picard to justify the permissionless taking of Star Trek for fan fiction, Captain Picard was posting a selfie in the viral #irespectmusic campaign.

Like so many others in the tech community, consciously or unconsciously, Ms. Novik equivocates on what Lessig calls the “hybrid economy”:  “Sharing” at the user level and commercial exploitation at the distribution level.  Some take a different view–this is what is sometimes called the “Web 2.0 antebellum economy.”  Monetize free labor to allow the distributor capture both the value of the user generated work and any underlying work.  Sometimes the distributor shares that value with the user-author but only rarely with the author of the underlying work.

As I understand the “hybrid economy,” the sharing part and the commercial part are inextricably connected–hence “hybrid”. I think it’s pretty clear that the reason that many users create “remixes” in the first place is to post their “remix” on a commercial site.  The users’ distribution options are quite different in the Web 2.0 era than they were in 1994 when Ms. Novik says she started writing fan fiction.  I don’t know where Ms. Novik posted her work, but in 1994 that would probably have been free news groups or hacker-ish bulletin boards on the noncommercial side and AOL, Compuserve or Delphi on the commercial side.  Those days are long gone, daddy-o.

And therein lies the rub.  If there is a clarification that the Congress may consider in the current review of the Copyright Act (in this case Section 107), it is whether this choice to make the remixed work available on a commercial site should itself be a fair use factor or given particular weight in considering “[t]he purpose and character of the use, including whether such use is of commercial nature or is for nonprofit educational purposes” and “[t]he effect of the use upon the potential market for, or value of, the copyrighted work.”

A user’s choice of posting such a work on a commercial site (and indeed the fact that the user probably creates the work with the express purpose of posting it on the commercial site where the user may receive a share of advertising revenue) belies the often praised “noncommercial use” which is actually not.  Or as David Lowery mentioned in his testimony, a copy masquerading as a fair use.

Fair use gave us the right to do that. I’m not a lawyer. But I can tell you that for all of us, what we were doing felt like just that — fair. We watched Star Trek every week. We bought the t­shirts and the videotapes and the spin­off books, and when they started making DVDs, we bought those, too.

Unfortunately, Ms. Novik only brought glittering generalities to the discussion.  There’s a lot of commerce attributed to “we” and if the implication is that what “we” did in 1994 is representative of what “they” are doing now, the plummeting sale of home video configurations gives it the lie.  While I’m sure that some of “we” did all these things, the “campfire” of the Internet wasn’t quite as devoted to massive copying for profit in 1994 as it is now.

But then Ms. Novik kind of slips in the straw man–or in her case, the straw child:

Of course we were going to have our own new ideas about the characters, about the universe, about what might happen. Of course we wanted to share our ideas with each other. When a previous generation watched The Lone Ranger on television and then ran outside to make up new adventures in their back yards, no corporations descended on them with cease ­and­ desist letters, attempting to squash the storytelling impulse.

It has never been the case that anyone even thought about trying to stop children from telling stories, making up plot lines, and generally getting some costumes and putting on a play in the barn.  But Google wasn’t selling advertising for an afternoon of children’s play, either.  And why should Google’s advertising team get to hide behind Captain Picard or the Lone Ranger?

Today the Internet is our shared back yard. It’s where we make friends and meet to play with them, children and adults alike, and when we tell stories, that’s where we tell them. It’s how we share our enthusiasms and our opinions, our responses to the things that excite or disappoint or inspire us.

And it’s where multinational media corporations like Google monetize the distribution of the “shared backyard”, track it, crawl it, take pictures of your house and playground and sniff your children’s wifi.  And possibly report it all to the National Security Agency.  Not quite the same.

Whose axe was being ground?  I noticed that Ms. Novik seemed very intent on creating sympathy for “remix artists” on the receiving end of “automated takedowns.”  A couple examples:

Virtually every remix video artist I know (including myself) has had their videos taken down from multiple platforms by automated systems that look for even minute fragments of copyrighted work. In order to restore them, if that’s even possible, they have had to file counter­complaints in the face of terrifying automated warnings telling them that they could be fined enormous amounts of money, and making them feel like criminals.

Now who might be a fellow complainer of automated takedowns?  Well, let’s see…someone who might be getting 20 million of them a month, perhaps?

So the question is, if these “fair use” creations are noncommercial when created, but created with the knowledge and intent that the “remix” be posted on a site that exists for a commercial purpose, should the fair use defense still be available?  And perhaps more importantly, should the intermediary that encourages users to create these infringing works be allowed the DMCA safe harbor (remembering that under U.S. law fair use is an affirmative defense available to an infringer as an excuse or justification for their otherwise illegal conduct).

And just a little food for thought:  Ms. Novik appeared at the committee with a stuffed animal that turned out to be a dragon based on her Temeraire franchise.  Not just any stuffed animal–no, a stuffed dragon sent to her by a fan.  You know, fan merch.

Recall that Peter Jackson (director of the Lord of the Rings and The Hobbit pictures) has optioned Temeraire.  There is a long, long way between option and a multimillion dollar opening weekend but let’s just say it happens.  Do you think that when the licensed stuffed dragons hit the toy stores that Ms. Novik’s rep and warranty of originality will mean much? 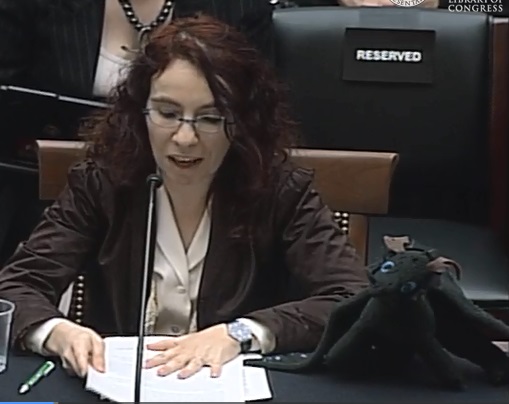 Ms. Novik and A Future Plaintiff

2 thoughts on “And a straw child will lead them: Fan Fiction as an Example of Web 2.0 Double Rip Off”