I know Mr. Almunia probably didn’t take this Yank seriously–God knows I do that with real Yankees all the time (even when it’s not SXSW).  But, Mr. Vice President, be advised:  Google really did extend its search monopoly to another search vertical when it acquired YouTube and YouTube is a monopoly.

Nowhere was this more apparent than at the MIDEM conference, and thankfully we have reporting by the fairly reliably pro-tech MusicAlly to document the anecdotal stories we’ve been hearing.  So if MusicAlly says that YouTube caught it at MIDEM, then the reality probably is closer to the tales we’ve heard–YouTube finally found out what it’s like to be in the music business when you’re a known scumbag.  It’s a very small business.

In their MIDEM recap, “The Music Industry’s YouTube Problem”, the otherwise smart guys at MusicAlly miss the boat.  First, there’s that title.  It should really have been “YouTube’s Problem with the Music Industry”.

Whenever a YouTube exec appeared in a panel session, they were put on the defensive about the company’s approach to music and creators, often by pointed questions from audience members – and on one occasion, angry heckling.

Next thing you know, they’ll be protesting the Google buses, barges and boats in San Francisco.

And for Mr. Almunia’s purposes, here’s the money quote:

Deezer CEO Axel Dauchez’s comment[ed] in one Midem session that Google’s video service is “the most important legal pirate” in the digital music ecosystem.

From other speakers, there were more examples of the warlike metaphors that have come to characterise the music and Big Tech debate. “They occupy territories,” said Emmanuel de Buretel, of Because Music. “Sometimes when you occupy territories and make the deals after, sometimes as a creator you still have frustration.”

Why?  Because they can.  And who will stop them?  The European Commission?  The Federal Trade Commission?  Nope.  The U.S. Department of Justice?  No, the DOJ apologizes to Google when U.S. Attorneys bring them to justice.

“I am concerned with YouTube entering the market because for YouTube everything is about dominance. And dominance is connected to destruction. That’s what I am concerned about, that it’s more about market dominance,” said another indie label boss, Horst Weidenmueller, of !K7. “I am more concerned than happy. I would rather prefer perhaps Google not being in music.”

Carr’s Google Enigma made a familiar business strategy point: companies that provide one component of a system love to commoditize the other components, the complements to their own products, because that leaves more of the value of the total stack available for the commoditizer….Carr noted that Google is unusual because of the large number of products and services that can be complements to the search function, including basic production of content and its distribution, along with anything else that can be used to gather eyeballs for advertising. Google’s incentives to reduce the costs of complements so as to harvest more eyeballs to view advertising are immense….This point is indeed true, and so is an additional point. In most circumstances, the commoditizer’s goal is restrained by knowledge that enough money must be left in the system to support the creation of the complements….

Google is in a different position. Its major complements already exist, and it need not worry in the short term about continuing the flow. For content, we have decades of music and movies that can be digitized and then distributed, with advertising attached. A wealth of other works await digitizing – books, maps, visual arts, and so on. If these run out, Google and other Internet companies have hit on the concept of user-generated content and social networks, in which the users are sold to each other, with yet more advertising attached.

Strangely, it is indie Martin Goldschmidt who MusicAlly says had the defining quote of the conference–that may be, but not for the reasons that he gives.

Actually–Mr. Goldschmidt has this entirely wrong.  YouTube very likely does owe “us” more than just a penny, they owe us many pennies.  But the average songwriter will never find out.  First, to even get a meeting at YouTube you have to sign an NDA.  No record company, music publisher or PRO on earth ever was that arrogant and legalistic.

Not only does YouTube have one of the most ridiculously kloogy and disorganized accounting systems known to mankind, YouTube’s incompetence is only rivaled by Google’s metadata for books in the sainted Google Book Search (see Prof. Geoffrey Nunberg’s “Google’s Book Search: A Disaster for Scholars” in the Chronicle of Higher Education).

Google even admits it:

But it doesn’t really matter–they won’t let you audit unless you’re a major, and even then they approach it like litigation.

And why do you think they do all this?  Because they can, because they know that no one can do a thing about it.

Imagine for a moment that the “whinging” of which Mr. Goldschmidt complains was being done against Universal or Sony or Warners?  Or Beggars or even against Cooking Vinyl.  Imagine if Lucian Grange got out in public and told the artists to eat cake.  Oh, sorry.  That was Guy Hands.

But imagine how that would have gone down.  The reason these things aren’t said is because the record companies have to do business with the artists and the artists have a choice of which label they sign to.  When the artist lawyer sits down with the band to make that list of where they’re going to “shop” the record, record companies don’t want to get put to the bottom or erased altogether, so there’s only so nasty they are willing to be.

Why?  Because the artist has a choice and they can walk across the street.

Artist’s can’t walk across the street with YouTube–because YouTube has a monopoly and they flex their muscle every now and then just to prove it.

The message that YouTube was getting at MIDEM is that they have a music business problem.  We want to walk across the street really badly.  It is indicative of just how badly the Stockholm Syndrome (or as I would call it, the Standard Oil Syndrome) has set in that MusicAlly completely misses the point.

And the message that Mr. Almunia sends when he gives Google a pass is that the cavalry is not coming and if we want to survive against the great Dominator is to circle the wagons and hammer them all day every day.

Because Google are only too happy to leave us all gasping like fish on a beach. 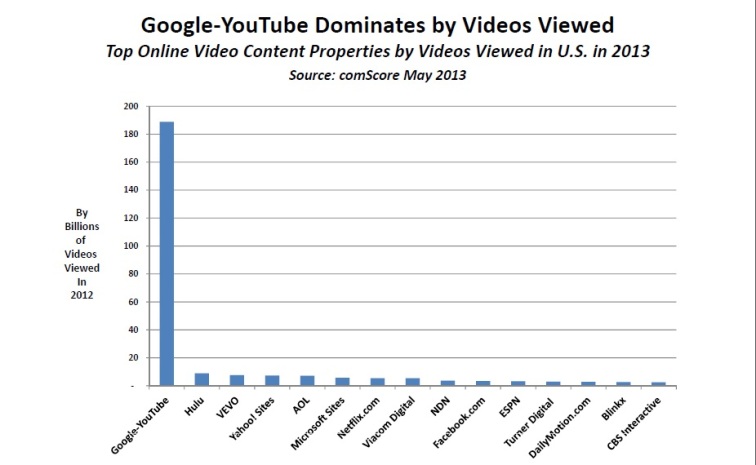