In case you haven’t noticed, Google has been conducting an all out assault on powerful positions in the U.S. Government.  Note that I say “the U.S. Government” and not “the Obama Administration” for a reason–it just happens, it is merely coincidental that President Obama is the occupant of the White House during Google’s rise to power.

Focusing on the political party of the White House misses the point–David Duke could get elected president and Google would still be playing the same game.  And it’s a game as old as mankind.  Using money to gain influence and using influence to gain power.

Because, as Erik Telford writes in Townhall, “Google [is] the Halliburton of the Obama Administration.”  Even Politico’s Google booster Tony Romm said “The Obama Administration recently plundered the search giant’s ranks.”  Andrew Orlowski wrote four years ago in the Register, “Google is Obama’s Halliburton: So Who’s Dick Cheney?”  (Easy answer: Eric “Uncle Sugar” Schmidt.) Tom Hamburger and Matea Gold have a must-read in the Washington Post on the subject as well as an indispensable chart of academic and other organizations that receive the Google shilling. It’s short sighted to think that Google is just going to go away if there’s a change in political party in the next presidential election.

For example, Google darling Lessig‘s Google-backed PACs (not to mention a $500,000 contribution from Facebook investor Sean Parker, a real commentary about the state of the Republic) is actually publicly hectoring people like Representative Fred Upton, revealing a degree of arrogance that you don’t find with Lessig counterpart Karl Rove.  Lessig, after all, isn’t the candidate.  Yet.

So who are these people?  Of course it all started with Andrew “we hardly knew ye” McLaughlin (coffee enthusiast and former worldwide head of lobbying for Google) who was planted in the White House and who had a little problem with Google Buzz and off he went.

Director of Google Ideas (and co-author with Uncle Sugar of The New Digital Age): Jared Cohen (formerly a member of the Secretary of State’s Policy Planning Staff and as an advisor to Condoleezza Rice and later Hillary Clinton).

And then there are dozens if not hundreds of former Hill staffers now working for Google’s DC shillery.

This is not even counting all the other academic influence (many of these names are also associated with Harvard’s Berkman Center), NGOs like the Electronic Frontier Foundation, and other centers of influence shaping public policy.  (We’ll have more about Lessig PAC after the elections.)

So this is starting to look like business as usual for massive multinational U.S. corporations like Enron, Halliburton, IT&T, United Fruit, the British East India Company…the list is long and distinguished. But don’t think this is going to go away with a change in the White House.

It’s just getting started.  And it’s not just in the U.S., either. And that is different. 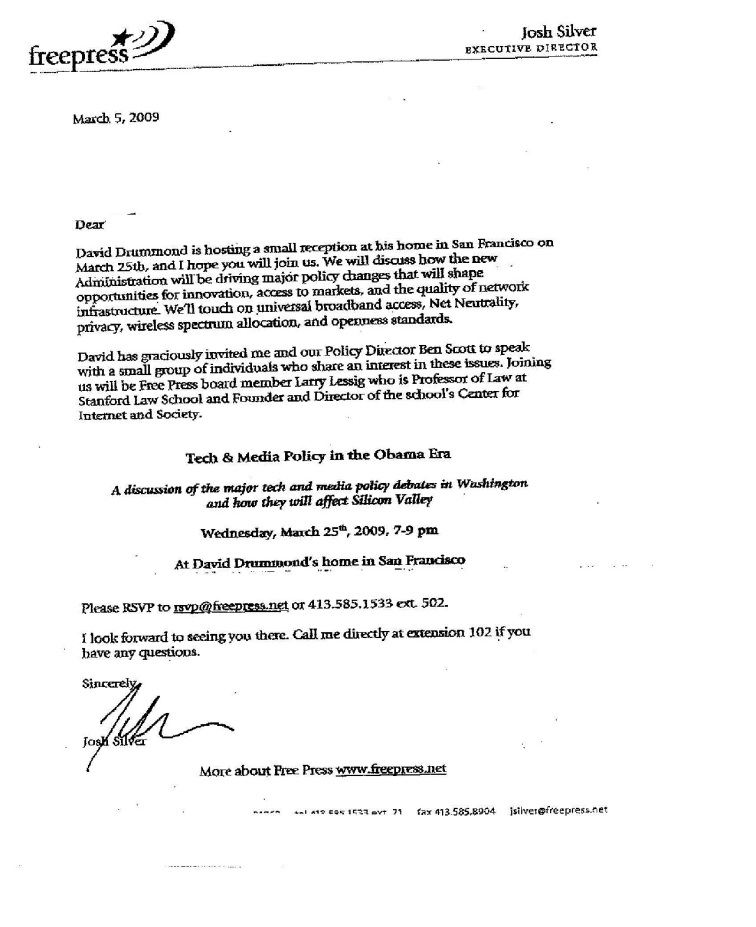