When we see Google getting hundreds of millions of takedown notices for links to unlawful material in search alone, not to mention getting called out by the governments of France, the UK and even–to an extent–the US for hosting jihadi recruitment videos on Google’s flagship video platform, you have to ask why don’t they fix these problems?  Is there something so defective in Google’s search algorithm or YouTube’s filtering systems that simply can’t be repaired?  Do we have to just suck it up?

Actually, the answer appears to be yes.  It’s pretty safe to say that Google is constantly working on changes to its search algorithm which one has to think is fairly characterized as Google’s core asset (see, e.g., Wikipedia entry on Google’s Penguin updates).  So it’s not like these problems have caught them by surprise. Google could have fixed the problems but the teams of engineers working on the algorithm haven’t fixed the issues despite having received 345 million trouble tickets.  Not to mention a pretty much unlimited budget.

Maybe they don’t think these are problems.  What if the Google algorithm is working according to plan. 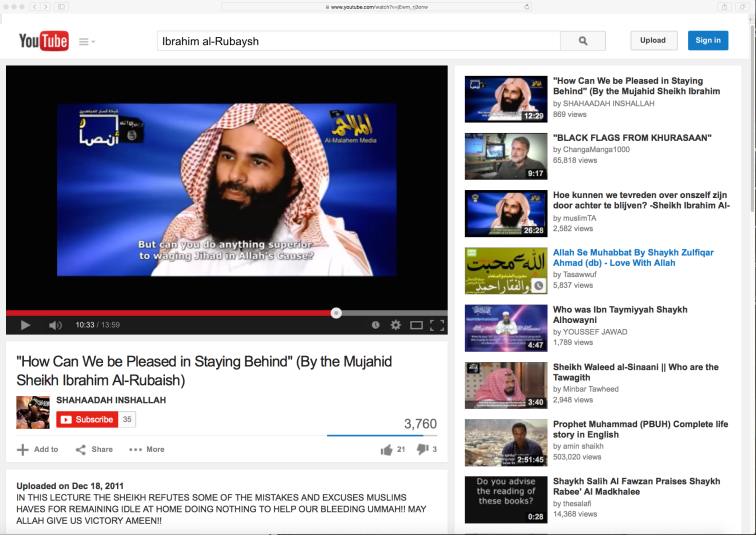 Ibrahim al-Rubaysh is the spiritual leader of Al Qaida in the Arabian Peninsula (AQAP).  He was held in extrajudicial detention at Guantanamo Bay, then escaped after the US permitted his repatriation to Saudi Arabia in 2006.  A YouTube search for his name returned this:

This is one AQAP leader–just one.  412 videos in a monetized search result courtesy of sureinsure.com.  I wonder if sureinsure.com knows the sainted Google advertising algorithm is serving up their ads for searches on a jihadi sheikh?  As any music licensing person knows, Google doesn’t share the revenue on YouTube search pages with anyone, so this is all on Google.

And this is the issue–do the advertisers have any idea where their ads are being served?  Could Google’s systems pass the kinds of tests of internal accounting controls required by the laws that protect stockholders from companies making money in sketchy ways?  You know, the laws passed after the Enron scandal?  And given Google’s appetite for litigation, would any of these advertisers be in a position to protect themselves or seek refunds from Google?  Not without the help of law enforcement officers like the scrappy Mississippi Attorney General Jim Hood, the immensely popular Mississippi Democrat who National Journal describes as “a fighter for the little guy” and who is not afraid to stand up to Google and other mega-multinational Leviathans.

A growing number of lawmakers around the world are taking a closer look at the responsibilities of social media in general and Google in particular.   For example, here’s a screen shot of a video from the “Jund al-Aqsa” (JAA) channel that was called out on the floor of the UK House of Commons by Diana Johnson, a leading Labour MP, who had quite a lot to say about Google’s involvement with jihadi recruiting.

I seriously doubt if Disney Parks or any of these other channels had any idea their YouTube traffic was coming in part from jihadi videos, particularly if they are ad supported.  Which means that part of their revenue was being driven by jihadi videos.

The truth is that “social media” platforms are contributing mightily to the spread of the jihadi propaganda as we hear on a daily basis now.  What we don’t hear is how these social media platforms profit from the propaganda from it to one degree or another.  Can Facebook say with certainty that ISIS hasn’t ever boosted a post?  Does Google have any idea who they are sharing revenue with on these channels?

As Ms. Johnson told the House of Commons:

A very brief look at what was available on social media enabled me to come across deeply offensive and worrying videos and tweets. I am very pleased that we are proscribing the organisations that produced them, but I think that the Minister should bear in mind that social media companies are making such videos and tweets available for everyone to see, and consider what more can be done about those companies.

It’s not just the UK.  France is hoping to make internet companies such as Google and Facebook accountable for social media posts promoting terrorism, Bloomberg reports.

The French government is mounting pressure on web companies to take responsibility for online hate speech as the nation battles against extremist groups in the wake of the Charlie Hebdo massacre.

Bloomberg reports that President Hollande spoke in Paris on Tuesday about a new law that would make internet operators “accomplices” of such offences — making a racial statement is a crime in France. A draft of the legislation could be made next month and challenges messages across social media platforms.

The president was talking at a memorial for Jews deported in World War II. He said that social media sites “can no longer close their eyes if they are considered accomplices of what they host,” and added: “We must act at the European and international level to define a legal framework so that Internet platforms which manage social media be considered responsible, and that sanctions can be taken.”

Let’s be clear–I’m not saying that Google seeks out these videos.  I’m saying that if they didn’t want the videos to be there, they have the means and the ability to keep them off, and they certainly have the capability to not monetize the jihad.

But they don’t.  And that’s just the way it is.

2 thoughts on “YouTube’s Bizarre Jihadi Video Problem: That’s Just the Way It Is”