OK, now that you’ve stopped laughing, that’s not a trick question.  We all know why Google has never been prosecuted by the U.S. government.  One way or another, they buy their way out of it through Google’s unprecedented network of lobbyists, fake academics and shadowy nonprofits like the Electronic Frontier Foundation and Public Knowledge.  (For the detail, see Public Citizen’s extensive report on Google’s three-dimensional influence network “Mission Creep-y–Google Is Quietly Becoming One of the Nation’s Most Powerful Political Forces While Expanding Its Information-Collection Empire“.)

The Wall Street Journal and a tidal wave of other publications are reporting on a previously secret internal FTC memo demonstrating conclusively that the FTC’s professional investigating staff recommended prosecuting Google.  The secret memo was produced by the FTC under a Freedom of Information Act request as disclosed in the Wall Street Journal.  If that wasn’t enough news, the copy of the secret report that the FTC provided was not redacted.  That means that there was nothing blacked out so the public could actually read the report with all the information that was available to the FTC commissioners–the political appointees for whom the professional staff authored the report.  And also read by outside attorney Beth Wilkinson who was hired by FTC Commissioner and Latham & Watkins partner J. Thomas Rosch shortly before the report was concluded to oversee the FTC’s investigation into Google.

That would be the same Beth Wilkinson who was herself a former Latham & Watkins partner, and a protege of Jamie Gorelick, who represented Google in the negotiation with the Eric Holder Department of Justice and who currently represents Google against Mississippi Attorney General Jim Hood.  The same Eric Holder who replaced Gorelick as Deputy Attorney General.  The same Jamie Gorelick and Beth Wilkinson who both worked for Fannie Mae where Wilkinson was paid over $5 million in compensation in 2006 plus an $800,000 “sign on bonus” even though “she knew little about mortgage-backed securities.”  Well, who among us can say they did, really?

We’ll get to just how important that is–and why without the benefit of the unredacted report, the public would never have known just how absurd it is that the FTC’s political appointees voted not to prosecute Google.  But realize just how unusual it is for anything even sightly negative about Google to reach the public and the press.  Protective orders, nondisclosure agreements, misleading statements to Congress requiring subsequent correction after the reporters have stopped looking, heavy political pressure, a PR department that demands journalists change unflattering but truthful reporting, inside deals to suppress evidence, all standard operating procedure.

But the delicious irony is that the last remaining state prosecution is being brought against Google by Mississippi Attorney General Jim Hood who Google is currently trying to muzzle based on stolen documents that surfaced after the United States suffered one of the first known cyber attacks by a state actor on a private company.  That state actor was North Korea. 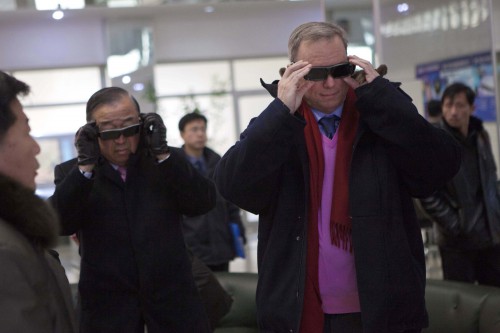 After heaping loads of sanctimony from Google and its shills against the scrappy populist Hood, all based on stolen documents presented to a federal judge, Google has pretty successfully deflected attention away from Hood’s antitrust case against the company.  But the disclosure of the previously secret report highlights that the U.S. had a strong case against Google that mysteriously was ignored by the commissioners who voted 5-0 against prosecuting Google.

Since the facts at issue in the Mississippi antitrust case (and other state cases) would have substantially overlapped with factual basis for the U.S. antitrust case, we can easily understand why Google would want to suppress the FTC report and worked hard to stop other state antitrust investigations (including hiring now Senator Ted Cruz when he was in private practice).  It was undoubtedly easier to get state attorneys general comfortable with the idea of dismissing their cases if the U.S. dismissed its own investigation.

But that didn’t work with Mississippi Attorney General Hood. Like his fellow prosecutors at the FTC, he smelled a rat. And now he’s got the FTC’s own report that demonstrates conclusively that the U.S. had a recommendation to prosecute Google from those who have the experience to know better and that these recommendations were ignored by political appointees.  And he didn’t get his evidence from North Korea.

More importantly, the FTC’s previously secret report shows that companies of the size of Amazon and eBay were so afraid of Google that they decided to file confidential complaints with the FTC, now revealed in the unredacted report.  Mississippi’s case against Google includes investigation into advertiser fraud on behalf of small advertisers who live in the state.

Ask yourself this:  If it weren’t for Hood’s investigation and the FTC staff’s “inadvertent” disclosure of the unredacted secret report, how would we ever know how bad Google’s behavior really is?  And if Amazon and eBay have to go to the FTC for help, who does the average Joe advertiser in Mississippi go to?

Remember–Google has been trying to relitigate SOPA as cover for trying to stop Hood’s antitrust investigation.  So far they have been successful using stolen documents and deflection.  Every state attorney general that Google talked out of prosecuting them for antitrust is reading this news coverage, too, and are rethinking what they should do now that it is obvious that they were conned.  Senator Cruz must feel like an idiot now that he knows conclusively just how much he was deceived by his client.  Nothing new, but it sure does sting when you put your own integrity on the line and your client burns you.

No one in the music business who deals with YouTube is going to be surprised by the behavior documented in the FTC’s previously secret report.  We’ve watched how they treat indie labels and independent artists like incomparable Zoë Keating.  There may be some comfort in knowing that Google treats us the same way they treat the big boys, but there’s no question that the Google problem is bigger than even the biggest of us can handle, and apparently bigger than even the U.S. government is prepared to handle.

But not Jim Hood.  As the extraordinarily popular Mississippi AG told MLex:

“If a mother is searching for a pediatrician somewhere in Europe, and she is able to get the correct results for the best pediatrician, as opposed to being led to some pediatricians that actually signed up for Google Plus, a mother in Jackson, Mississippi, ought to be able to get the same search result. The EU is leading the way, and America will follow at some point.”In the US, he added, “people don’t really get it. The Internet is great, but people don’t really grasp what [Google has] really done” with search results. Google Plus is the company’s online social network. A Google spokeswoman declined to comment Thursday on Hood’s comments, citing the ongoing litigation. Google had previously acknowledged antitrust investigations by the attorneys general of Texas, Ohio and Mississippi. While Texas and Ohio spent several years investigating Google for antitrust violations, both states dropped their probes after taking no action in 2014….

Despite the fact that Hood is the only known US regulator investigating Google for antitrust violations, the Mississippi attorney general said he believes that will someday change.“Google is walking into exactly what [AT&T] did. At some point, they are going to get broken up. If this ruling [on the Wingate injunction] is that an Attorney General can’t even ask a question, even as strong as a lobby as they have in Washington, the Congress is not going to let that stand,” Hood said.“Basically Google is just walking into an antitrust case where they are broken up,” he added. “Maybe in the next administration, there is some interest in pursuing it, and the Congress gets on it. They are going to get broken up.” 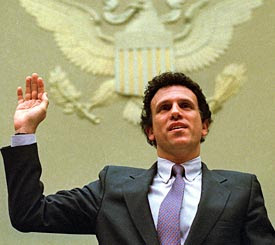 Remember–if you had walked into a room of MBAs in 1985 and told them that in a few years time junk bond king and Master of the Universe Michael Milken would be in prison and his vastly influential Drexel Burnham Lambert would be bankrupt, you would have been laughed out of the room.  And yet it happened.

Why?  Because Goliath never learns.