Americans are freedom loving people, and nothing says freedom like getting away with it.

Secretary Reich makes the point that Google, in particular, has an unprecedented stranglehold on the U.S. Government:

In 2012, the staff of the Federal Trade Commission’s Bureau of Competition submitted to the commissioners a 160-page analysis of Google’s dominance in the search and related advertising markets, and recommended suing Google for conduct that “has resulted — and will result — in real harm to consumers and to innovation.” But the commissioners chose not to pursue a case. Investigators also found evidence that Google was pushing its products ahead of competitors’ on search results, though no legal action was recommended on this point.

It’s unusual for commissioners not to accept staff recommendations, and they didn’t give a full explanation. The F.T.C. noted a competing internal report that recommended against legal action, but another plausible reason has to do with Google’s political clout. Google is now among the largest corporate lobbyists in the United States. Around the time of the investigation the company poured money into influencing both the commissioners and the commission’s congressional overseers.

Google is heading into a major fight with antitrust officials in the European Union for some of the same reasons the F.T.C. staff went after it. Not incidentally, Europe is also investigating Amazon for allegedly stifling competition in e-books, and Apple for doing the same in music. While many on this side of the Atlantic believe Europe is taking on these tech giants because they’re American, another possible explanation is that Google, Amazon and Apple lack as much political clout in Europe as they have here.

Of course Google is simply conducting business as usual in the world of crony capitalists.  While Secretary Reich could easily have compared Google’s deal with the Department of Justice for massive violations of the Controlled Substances Act to the recently announced deal with Government Motors…sorry, General Motors…that absolved GM of killing 124 people, let’s stay with Google’s influence over the current administration. 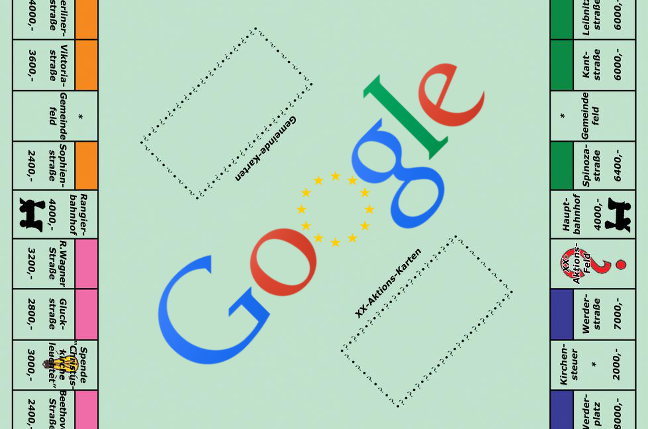 Second, this is not political.  Google just happened to get their snout in the U.S. Government’s trough during the Obama Administration.  Their influence is so deep and so pervasive with staff across the government that it really doesn’t matter who is in the White House or who controls the Congress–without even considering their armies of lobbyists.

Google controls the government, make no mistake.  It will take generations to get them out.  So let’s get started.  There’s no time like the present.  Why?  Because things like this happen:

The MIC Coalition’s lobbyists at Glen Echo (who by the way are trying to have their own lobbyist panel at SXSW) sent a letter addressed to the Attorney General and Renata B. Hess, Deputy Assistant Attorney General for Criminal and Civil Operations at the U.S. Department of Justice’s Antitrust Division.

I wanted to share with you the attached letter from the association members of the MIC Coalition to U.S. Attorney General Loretta E. Lynch and Deputy Assistant Attorney General Renata Hesse. The letter documents the importance of antitrust enforcement regarding the licensing of musical works and urges the Attorney General’s Office to reject calls to weaken the ASCAP and BMI consent decrees as part of their ongoing review.

Please let me know if you have any questions regarding the letter.
Best,
Aaron

The letter asked the Justice Department to investigate the SESAC and HFA merger.  Yes, that’s right.  The MIC Coalition includes companies with a combined market cap over $2 trillion but they need the government to protect them from songwriters.  EEK! A songwriter!

The letter said, in part:

[W]e support a rigorous assessment of whether SESAC should be governed by a parallel consent decree, we also urge you to reject calls to weaken the ASCAP and BMI consent decrees as part of your ongoing review. Rather, the Department should maintain and strengthen the important safeguards provided by the consent decrees, particularly in times of unprecedented consolidation in the publishing industry, to further promote a stable and transparent marketplace for musical works.

Well, one reason might be that Ms. Hesse, in her own words, used to do a lot of work for Google shortly before joining the Justice Department–and Google is leading the MIC Coalition.

According to an interview from 2008, she was pretty busy with one of her firm’s most important clients:

Renata Hesse:  Typically when we do counseling, people come to us and say, “Hey, I really would like to do this.  Is that okay?” and sometimes you get some pretty interesting questions that way.  Usually, the business people are the ones who are thinking of the clever ways of making sure that their products succeed and not the lawyers.

There’re been obviously antitrust issues between Google and Yahoo!  Are you able to comment on any of those?

Renata Hesse:  I’m not, really, I’m afraid since I did a lot of work for Google on it.

As Secretary Reich said, “[t]he real question is how government organizes the market, and who has the most influence over its decisions.”

The answer is becoming increasingly obvious.

2 thoughts on “Big Tech Has Become Way Too Powerful: Google Is Playing By the Rules They Make”