Constantin van Lijnden writing in the top German paper Frankfurter Allgemeine Zeitung has uncovered the financial link between YouTubers in the paid service of Google to “protest” in favor of the multinational monopolist’s interests in the European Copyright Directive (aka “Article 13”).

In his story filed today “Gekaufter Protest?” or “Purchased Protest?”, van Lijnden’s reporting has turned up what appears to be proof positive that Google’s interference lobbying has sunk to new depths of depravity (translation courtesy of Google Translate, courtesy of Google Books):

According to research by this newspaper, several German Youtubers have been offered money by an interest group that appears under the name “Create Refresh” to position themselves in videos against Article 13 of the copyright reform, which is particularly relevant for the video platform. “I am writing for financial support available to content creators who want to protest against Article 13. Be it a video, memes or graphics – we are open to suggestions, “says Mirko Drotschmann, who trades on Youtube as “mrwissen2go “and has about 900,000 subscribers.

Similar offers have been received by the Clixoom Science & Fiction channels (over 500,000 subscribers), Pietsmiet (more than 2.3 million subscribers) and Jana Riva (around 50,000 subscribers). The latter were promised €2,000 for a critical opinion on Article 13. All four emphasize the finding that they have not responded to the offer and have wondered very much about it, as such attempts to collect money would otherwise be almost non-existent and money would be offered only for the promotion of products.

MTP readers will also recall the humiliating failure of the pro-Google lobbying effort to turn out any actual humans to protest in advance of prior votes.  I warned at the time not to underestimate Google’s ability to deliver protesters–one only need remember how the homes of Germans who opted out of Google Street View were mysteriously egged by “protesters” all in one night who also hung signs on their target homes stating “Google is Cool”.

The opposition to Article 13 is organizing a protest for March 23 and claims to have a number of cities in Europe targeted, mostly in Poland and Germany (two countries where Google has invested heavily in their academic missionary outposts for a decade or more).  The efforts may be aided by the general waive of protests about a host of social issues sweeping Europe, not to mention a large Brexit protest scheduled for March 23–coincidentally.  It may be possible to create the impression that one protest is about another topic altogether, particularly if the propagandist shows pictures of a protest in a wide shot that has no readable protest signs in frame.

Still, the logistics of getting protesters from one stronghold to a weaker outpost at a particular date and time was striking challenge given the geography.  Van Lijnden addresses how Google’s lobbyists rose to the challenge in the FAZ article:

[T]he protest is financially supported: Under the name of “EDRI” [the European Digital Rights lobby shop] numerous net political NGOs has offered…to bear the travel and hotel costs of people who want to lobby in personal talks with the deputies of the European Parliament. According to EDRI, a budget of €15,000 is available, two-thirds of which would be provided by the Open Society Foundation founded by George Soros and one third by the industry association “Copyright 4 Creativity”.  [MTP readers will have seen that bunch before back in 2015.]

The latter is also one of the supporters of “Create Refresh” and is led by Caroline De Cock, also managing director of the Brussels-based lobbying company “N-square”. Its clients include Google which as a parent company of Youtube would be hit hard by the reform. Such indirect lines from Silicon Valley to the aggravation and whipping of the protest can also be drawn elsewhere, such as the “Center for Democracy and Technology”, which is also listed as a supporter of “Create Refresh” and “Save your internet” and led by Nuala O’Connor, the former lawyer of Google subsidiary DoubleClick.

We wrote about the N-Square group back in 2015:

While Google itself is not a member of Copyright 4 Creativity, the organization is run by a long-time Brussels lobbyist whose firm represents Google, and even a cursory look at the Copyright 4 Creativity materials reveals some of the same rhetoric we have heard for years from the Google-funded anti-artist crowd.  This, of course, is how the astroturf game is played.

“Purchased Protest?” is extraordinarily brave reporting by FAZ given the level of hostility that Google has ginned up in Europe through its interference lobbying efforts rivaled only by Russian bot farmers and Cambridge Analytica–if not inspired by them.  Ahem.  Vlad would be proud. 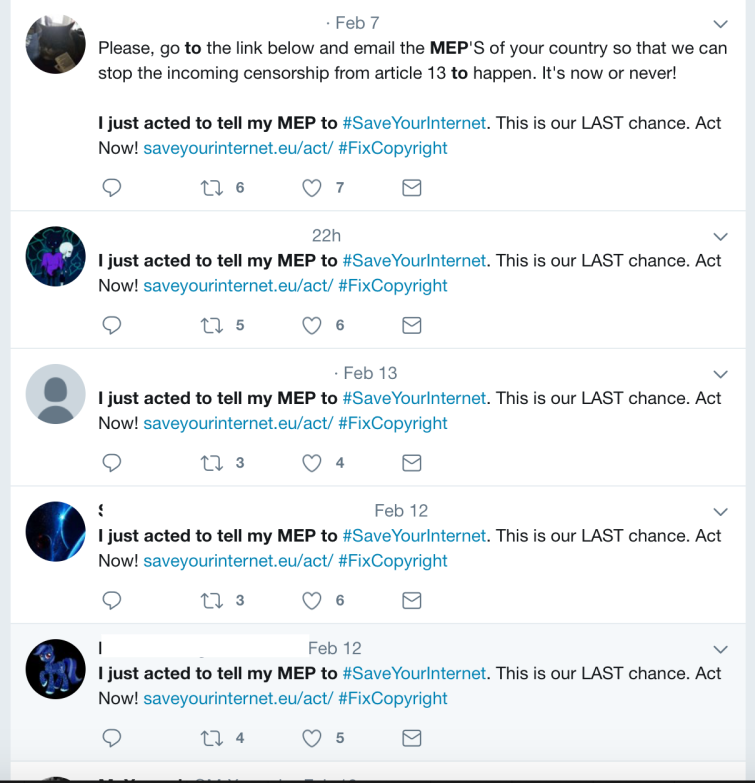 This isn’t the first time that a major newspaper has caught Google and its YouTube subsidiary faking an Article 13 protest or stirring the contagion pot complete with bots and Russomania.  And of course David Lowery and Volker Rieck have done important work in exposing the rot.

And of course there’s no one who knows more about where to find individuals likely to carry Google’s water, knowingly or unknowingly, than the one company in the world that knows what you’re thinking before you do.  Unbridled snooping by the pervy Google data scientists produces unimaginable benefits when that information is turned to political profit.

The first rate reporting in these bombshell revelations are all the more reason why the European law enforcement authorities need to open a criminal investigation into the whole mess.  As van Lijnden concludes:

[Big Tech’s attempt] to buy critical voices in the channel that is relevant to the debate highlights the manipulative methods that have fueled or even generated parts of the protest.