Don’t believe the headlines–just because there’s no money for artists from the PledgeMusic bankruptcy does not mean that the story is over.  It just means that justice is going to take longer.  If you were paying attention, it should have been obvious from the beginning that PledgeMusic was a financial roach motel–the money goes in but doesn’t come out.

In the least suspenseful story of the decade if not longer, it appears that PledgeMusic’s officers and directors ran the company straight into the ground.  It’s unclear from the Official Receiver’s report (which is available here) whether Pledge had any cash on hand when it filed for liquidation.  The Official Receiver appears to value the company’s intellectual property at £20,000 as its only asset.  Pledge had £7.4 million in “debt” so nothing for the artists or anyone else.

However, the really important part of the Official ReceiverReceiver’s report relates to the officers and directors.

Let’s not forget that to a large degree, once the board becomes aware that their company is insolvent, their fiduciary duty shifts from the shareholders to the creditors, especially if the board fails to disclose the insolvency to creditors and fails to seek bankruptcy protection (which goes by different names in the UK, administration or liquidation).

And that last sentence is also telling.  Why did the board seek legal advice about whether the pledge monies were or were not trust monies?  Again, answering a question that wasn’t asked exactly.  Who gave them this advice, what prompted the board to ask for it, when did they ask for it and what happened after they got the advice?  Did the lawyer also tell the board that they could tell the public they were soliciting funds for one purpose and then use the money for an entirely different purpose for their or the company’s own benefit?

You see, it doesn’t really matter whether the monies were held in trust if the entire process was a fraud.  But I’d still like to hear from that lawyer as to exactly what he or she told them–I seriously doubt that it’s quite as broad as all that.

But here is the punchline of the Official Receiver’s report: 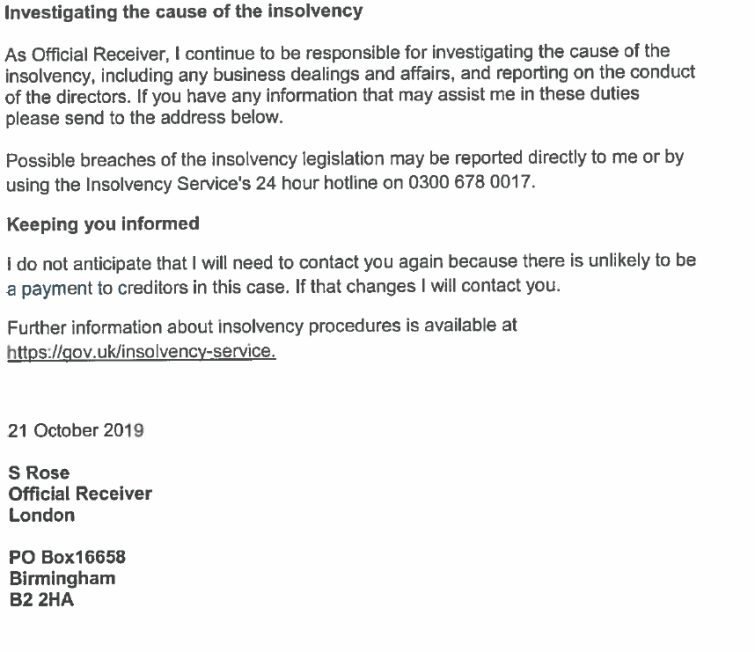 It does not sound to me like the Official Receiver (the liquidator) views her work as completed.  What it appears remains to be determined now is whether the cause of the insolvency (or bankruptcy) requires further action, including a referral by the Official Receiver to Scotland Yard and/or the Crown Prosecution Service (which is essentially the prosecution arm of the Home Office–the people with the white wigs for the BBC watchers).

Artists should feel free to call the Official Receiver at the number they gave or I believe you can still email to LondonB.OR@insolvency.gov.uk using the matter LQD5671373 in the subject.