They say it’s news when man bites dog, but it is also news when Lyor Cohen invites YouTube audits–or maybe even an SEC investigation.  Crazy, you say?  Not really.

Google is pushing how profitable YouTube is and YouTube CEO Susan Wojcicki is in turn pushing how much of Google’s revenue gets paid to creators.  Both these things are odd.  Or maybe that non prosecution agreement finally got signed or the statute of limitations has passed, who knows.

But Lyor seems to think promoting how much YouTube has paid to artists is going to make people feel better.   More like makes people more likely to sue or at least audit (if they can) because nobody believes it.  Plus, even if you can audit them (which most people can’t as Rights Flow executives revealed at an A2IM meeting many years ago), YouTube will never let you actually confirm how their advertising revenues were calculated.

Susan has a blog post about how groovy it all is–remember how YouTube got started?  Why? Because “[w]e’re also partnering with artists to support and amplify their work through every phase of their career.”  Whether the artists like it or not.  But it’s her trip down memory lane that’s particularly interesting and calculated to make YouTube charming.  Kind of like a chia pet with fangs that grows the more money it takes from you.

15 years ago today, YouTube took a small step toward starting something big. On February 14, 2005, YouTube was registered as a website. Its founders wanted to create a way for people around the world to share videos. Soon after, the first video ⁠— “Me at the zoo” ⁠— was uploaded, and before the end of the year, the site was receiving millions of views a day.

Yes, we remember!  We remember these plucky little startup emails, too:

• In a June 15, 2005 email to YouTube co-founders Steve Chen and Jawed Karim, YouTube co-founders Chad Hurley stated: “So, a way to avoid the copyright bastards might be to remove the ‘No copyrighted or obscene material’ lìne and let the users moderate the videos themselves. legally, this wì1 probably be better for us, as we’ll make the case we can review all videos and tell them if they’re concerned they have the tools to do it themselves.”

• In a June 20, 2005 email to YouTube co-founders Chad Hurley and Steve Chen, YouTube co-founder Jawed Karim wrote: “If we want to sign up lots of users who keep coming back, we have to target the people who will never upload a video in their life. And those are really valuable because they spend time watching. And if they watch, then it’s just like TV, which means lots of value.”

• On June 21, 2005, YouTube co-founder Jawed Hohengarten, Karim stated in an email to YouTube co-founders Chad Hurley and Steve Chen that “Where our value comes in is USERS…. [O]ur buy-out value is positively affected by … more Youtube users…. The only thing we
have control over is users. We must build features that sign up tons of users, and keep them coming back.”

• On July 4, 2005, YouTube co-founder Chad Hohengarten Hurley sent an email to YouTube co-founders Steve Chen and Jawed Karim titled “budlight commercials,” stating “we need to reject these Hohengarten too” Steve Chen responded by asking to “leave these in a bit longer? another week or two can’t hurt;” Jawed Karim subsequently stated that he “added back all 28 bud videos. stupid…,” and Steve Chen replied: “okay first, regardless of the video they upload, people are going to be telling people about the site, therefore making it viraL. they’re going to drive traffic. second, it adds more content to the site. third, we’re going to be adding advertisements in the future so this gets them used to it. I’m asking for a couple more weeks.”

• In a July 10, 2005 email to YouTube co-founders Chad Hurley and Steve Chen, YouTube co-founder Jawed Karim reported that he had found a “copyright video” and stated: “Ordinarily I’d say reject it, but I agree with Steve, let’s ease up on our strict policies for now. So let’s just leave copyrighted stuff there if it’ s news clips. I still think we should reject some other things tho. . .”; Chad Hurley replied, “ok man, save your meal money for some lawsuits! 😉 no really, I guess we’ll just see what happens.”

• In a July 23, 2005 email to YouTube co-founders Steve Chen and Jawed Karim, YouTube co-founder Chad Hurley responded to a YouTube link sent by Jawed Karim by saying: “if we reject this, we need to reject all the other copyrighted ones…. should we just develop a flagging system for a future push?”; Karim responded: “I say we reject this one, but not the other ones. This one is totally blatant.”

• In a July 29, 2005 email about competing video websites, YouTube co-founder Steve Chen wrote to YouTube co-founders Chad Hurley and Jawed Karim, “steal it!”, and Chad Hurley responded: “hmm, steal the movies?” Steve Chen replìed: “we have to keep in mind that we need to attract traffic. how much traffic will we get from personal videos? remember, the only reason why our traffic surged was due to a video of this type…. viral videos will tend to be THOSE type of videos.”

So remember those days when Google evaluated acquiring YouTube?  Susan does!  She was in at the beginning!

As YouTube began to take off, it became clear that the company would need significant capital investment to support its growth, so YouTube decided to sell to another company. I, along with Salar Kamangar, made the case to bring the companies together. After the acquisition, founder Chad Hurley became CEO, then Salar, and I was incredibly honored to become YouTube’s third CEO six years ago.

Yes, Susan, we remember those heady days when Google was buying YouTube!  Since you were on the Google team, remember this from Viacom’s discovery?  (Of course, Susan’s private trip down memory lane probably has so much more detail!) 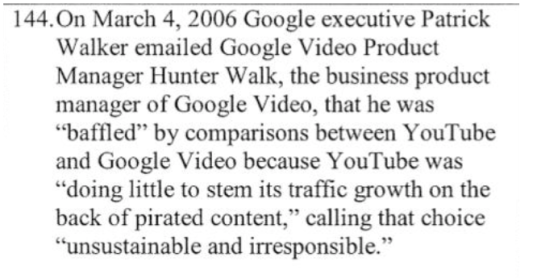 And then there was this? 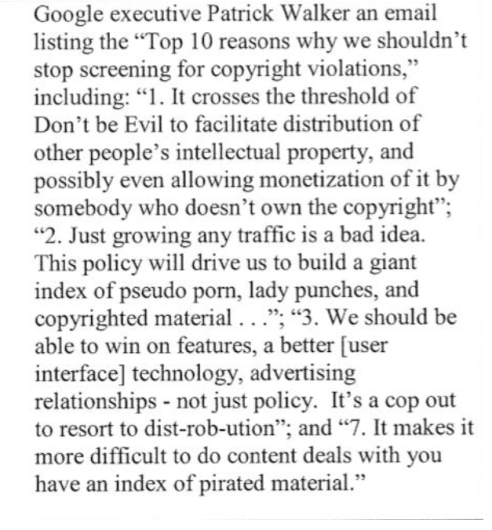 No, we remember, too, Susan.  We remember, too.  We have to congratulate you for keeping the YouTube startup culture firmly in place.

One thought on “Man Bites Dog, Lyor Wants an Audit and YouTube is Good For You”