Here’s an update on the bizarre saga of Apple Music and The MLC. Remember that HFA sent to its publishers this termination notice from Apple Music on Apple’s lyric and cloud services licenses (and assume for the moment it was also sent to other non-HFA publishers):

This is remarkable because the Music Modernization Act limits the kind of licenses that the MLC can administer because the blanket license only applies to a limited number of activities (on demand streaming, limited downloads and permanent downloads). It does not apply to lyric licenses or cloud services because the blanket license is not available for those rights. Those rights would still need to be licensed under the very type of agreements that Apple is terminating.

This question came up during a recent MLC webinar moderated by MLC executives Kris Ahrend (CEO) and Serona Elton (Head of Educational Partnerships). These two executives were asked the obvious question, how can The MLC do lyric licensing for Apple. An eagle eyed MTP reader sent this screen capture from the chat: 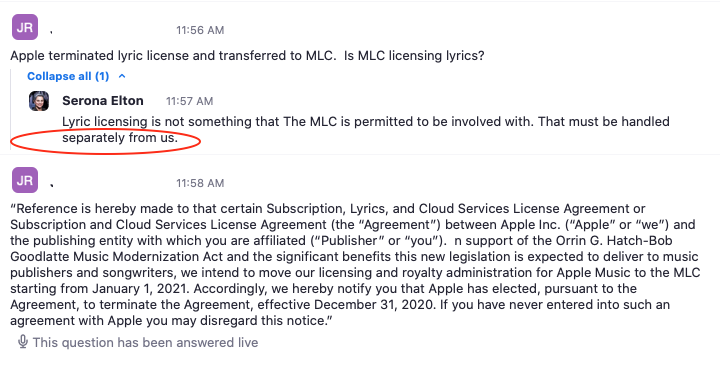 So you have to ask, if The MLC can’t license lyrics, why did Apple terminate their lyric licenses and transfer to The MLC?  And what does “separately from us” mean?  The answer is not really responsive to the question.

Separately from us could easily mean that while The MLC is not licensing lyrics, some other entity is. (Presumably the lyrics are from songs that are subject to the blanket license so the MLC would play a role.)   Remember that the termination notice came from HFA.  Could it be that “separately from us” means HFA would be issuing a side by side lyric license on behalf of its publishers?

And remember that the notice from Apple includes this language:

[W]e intend to move our licensing and royalty administration for Apple Music to the MLC starting from January 1, 2021.

Congress did not intend that The MLC offer licensing and royalty administration for DMPs like Apple.  That would mean that The MLC would be paying itself for Apple’s blanket activities.  That is what HFA does through a rather porous ethical wall (and for which they have been at the center of two class actions and numerous copyright infringement lawsuits and are currently a co-defendant with Spotify in another post-MMA lawsuit).

It has long been assumed that somehow some way The MLC intends to offer bundled licensing which is currently prohibited.  Bundled licensing could take the form of performances, ex-US rights, sync, even general licensing.

It seems like that effort is quietly underway.  What is an alternative explanation for Apple terminating a large number of agreements and transferring its licensing and royalty administration functions to The MLC?  Is the plan that The MLC gets the business and HFA does the work that The MLC is prohibited by statute from performing (at least until they move the goalposts again)?

This does help to explain why there is no MLC database and all The MLC’s “data quality initiative” corrections and improvements are being performed on the HFA database (which HFA owns and will use for work not limited to the blanket license).