It is difficult to understand the reasons why, but the current proposal for mechanical royalty rates before the Copyright Royalty Board do not include an index for inflation.  Until a 2006 it was customary to include a rate increase for mechanical royalties, often indexed to the Consumer Price Index (not the best index to chose, but serviceable). This practice began in 1978 but has been denied to a generation of songwriters since 2006 when certain mechanical rates were frozen and capped.  Why?  Because them what had the power to make the rules made that new rule and abandoned the old rule.  And in the face of the edict from the rulemakers, the ruletakers simply sucked it up. They got away with it for 70 years when they froze the rate at 2¢, so why not try it again?

Yet, the recommendation before the Copyright Royalty Judges brought by the major labels and publishers is that the 2006 rate be continued at 9.1¢ for another five years for all songwriters.  (This rate is paid by record companies for physical and downloads, and they also want to freeze the rate for ringtones and “music bundles.”)  To my knowledge, the streaming mechanical rate has not been indexed to inflation, at least not overtly as had been the case.

Unfortunately, songwriters have to hope that the self-appointed songwriter bargaining group before the Judges make the right bet on inflation–the one actual songwriter in the proceeding is bitterly opposed. There is no reason to believe they will because they haven’t for 15 years.  And you know what they say about the definition of madness, shared or unshared.

Why am I concerned about inflation over the next five years (or more likely, stagflation when income declines and prices increase like right now)?  Mostly because inflation is the most regressive tax of all and affects songwriter heirs, families and those relying on catalog royalties the worst.

April Personal Income dropped 13.1%, which I believe is the largest decline in history.   This is partly to do with the end of stimulus in March, but is still a remarkable number.  Other benchmarks were also wobbly according to the Bureau of Economic Analysis:

The interest rate on the 10 Year Treasury Note has increased over the last year to about 1.6% from about half that a year ago and is trending upward.  Interest rates for the 10 year bond doubling in a few months is not a good sign and is highly unusual. 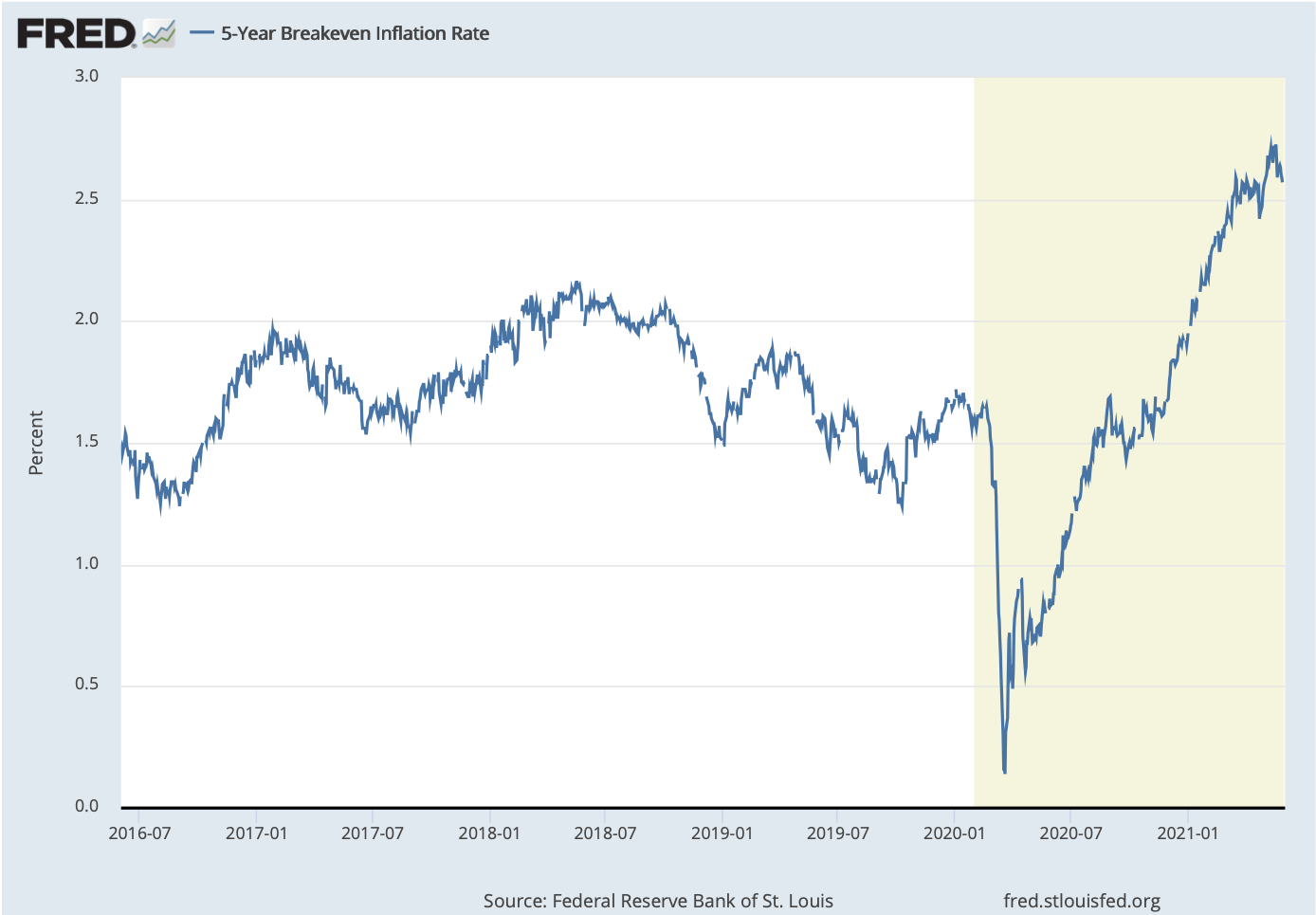 Breakeven is a measurement of what market participants expect inflation to be in the next five or 10 years, on average, based on the spread between a nominal 10 year treasury and an inflation-linked bond of the same maturity (TIPS).  (The cash flows from inflation-linked bonds are indexed by the non-seasonally adjusted consumer price index.  If you want to get really wonky, it’s [(10-year nominal Treasury yield) – (10-year TIPS yield)]).

In plain English, this means that the super-experts in the bond market (vastly greater impact on daily life than the stock market) expect inflation to be 2.6% over the next five years.  The trend line is up and to the right, which is bad for songwriters with frozen mechanicals.

So how can the correct answer from the smart people be to extend the freeze on mechanicals?