Über’s attempt to enter the Austin market with its dominant ride sharing service is becoming the proverbial cautionary tale for what can happen to an otherwise cool, live and let live city’s way of life when Silicon Valley’s tech bully boys descend on the town.  And decide to spend whatever it takes to get their way.

Early voting begins today on a ballot initiative paid for by Über and Lyft, and it’s becoming blatantly apparent that Lyft may have the wrong style mustache on their cars (h/t Mike Godwin).  The ballot initiative would replace a duly enacted regulation of the Austin City Council to require fingerprinting of Über and Lyft drivers with a new regulation drafted by the billion dollar dominant corporations that would strike the fingerprinting requirement among other things.

According to the Austin-American Statesman, taxi drivers, limo drivers and other public transportation operators also have to undergo fingerprint-based background checks.

What happens next will be very, very familiar to artists and the music business–which makes it even more startling that some leaders in Austin’s music industry didn’t see this coming.  Enter Napster–with Austin City Council’s Ann Kitchen in the role of Lars Ulrich (or Hilary Rosen, I haven’t decided yet).  One problem–Über is having trouble making reality fit the narrative.  Why?  According to The Guardian:

[Ms. Kitchen, t]he 61-year-old Austin councilwoman had the temerity to propose that Über and its rival, Lyft, be subject to the same rules that apply to other companies offering transport in the Texan state capital.

Kitchen, who represents the 80,000 people of district 5 in South Austin and was a barely-known local political figure in the city, now finds herself the target of a sophisticated, well-funded, and highly-personalized political operation.

She is facing a recall election campaign, the rare procedure through which elected officials can be booted from office. If it succeeds, she will be the first city official to be recalled in the city’s history.  [The recall so far has failed.]

“It’s brutal, and I don’t understand it,” she said. “I want to work with Über. I’m not trying to ban them.”

Kitchen, who used to work as a social worker, does not fit a stereotype of a ragged, political bruiser….

A longtime advocate for affordable housing and expanded medical coverage, she had been an expert in transport issues, never taken an Über ride, and never thought much about the service. That changed in January 2015, when Austin’s newly-elected city council convened, and its mayor, Steve Adler, assigned Kitchen to chair the mobility committee, a team with jurisdiction over transport in the state capital.

But today we are told of an extraordinarily coincidental letter from the head lobbyist at the U.S. Chamber of Commerce lobby shop that is turning up the heat on Austin–all of Austin.

According to the Austin Chronicle (the newspaper of choice for Austin’s music community), all of a sudden the head of the U.S. Chamber of Commerce is sticking a nose into how we govern ourselves in Austin.

And make no mistake–this is no longer about the dominant Über.  This is about what a rich corporation can do to a town that gets in the way of their dominant share of the ride hailing business.

The Chronicle tells us (More Strong Arming from Über and Lyft):

On April 21, U.S. Chamber of Commerce President Amanda Eversole wrote to U.S. Secretary of Transportation Anthony Foxx, suggesting that Austin’s candidacy for a Smart City Challenge Grant might be clouded if Austin voters reject Prop. 1 on May 7. 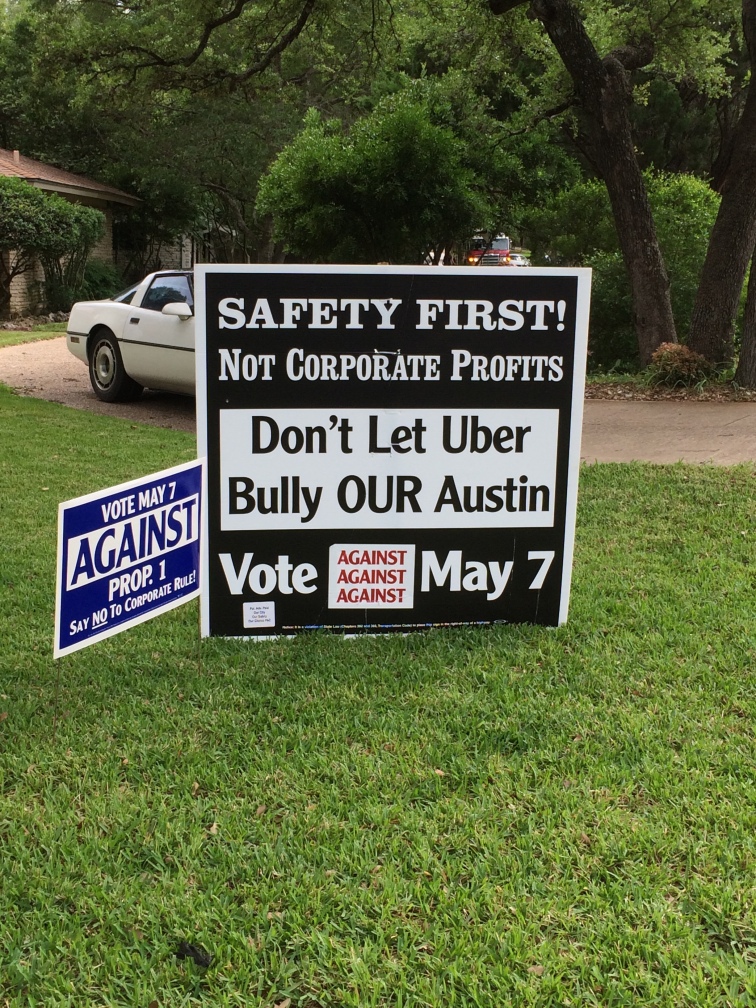 So once again, Austin begins a work week, not dealing with affordable housing, not dealing with a collapsing music economy (that Über CEO Travis Kalanick did his part in destroying early in his career when he ran the pirate site Scour)–no we are dealing with yet another escalation against our city by the bullies from Silicon Valley.  And I can’t help noticing that Google has its snout in all of the above–Über, Obama and the U.S. Chamber.

There may be a bright side to this story, however.  Given the timing of this latest escalation and the backlash that is already developing in the local community, this may be a desperation play driven by private polling.  We get comments like “I’m so sick of getting pushed around by Über that I’ll vote against Prop 1 just to get it to stop.”

I get it, but don’t think for one minute it will stop regardless of the vote on Prop 1.  If Über loses, they will go to the State legislature and try to impose their will on the entire state.  If they win, the people will despise them.

So why should Über be taking a stand in Texas?  Why would the boys from Silicon Valley want to grind their boot in the face of Texas?  What do they have against Texas?  Whatever that is, it’s really misplaced in Austin where mega corporations are not particularly well received.

Of course, none of this should come as a surprise to anyone who has followed the career of Über CEO Travis Kalanick from the file-sharing king of Southern California with the bankrupted Scour pirate site to the ride-sharing King of The World with the dominant Über.  According to Re/Code:

Kalanick vowed that Über would use the giant war chest to…fight a hard-nosed public relations battle with the “asshole” taxi industry.

Or as Ann Kitchen told The Guardian:

“These guys out in Silicon Valley like to consider themselves disrupters, but they’re just another version of what we’ve had before: big business [types] who think they can write their own laws.”