We’ve all read the shocking news of Prince and the drug fentanyl.  Fentanyl is a drug so powerful you have to wonder how easily it could be obtained outside of a hospital setting.  The answer to that is quite straightforward:  Just one click away in a Google search or a YouTube video.

And a quick Google search for “fentanyl no prescription” brings many links:

If you click on the top search result, here’s what you get taken to: 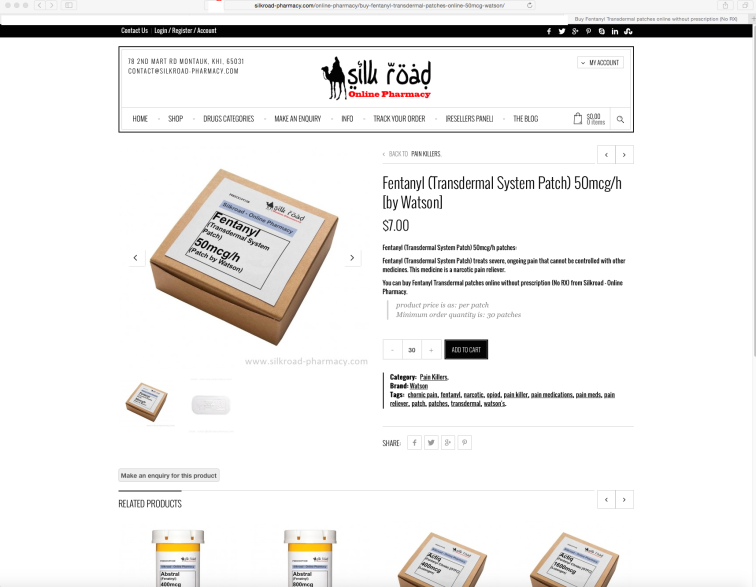 It is an obvious fact that Google the data scraper profits from this traffic and permits countless “how to” videos for all kinds of illegal drugs on YouTube, a site clearly directed to children and teens, as well as Google search.  In fact it is so well known in some law enforcement circles that Google was the subject of a multi-year sting operation by the FBI, IRS, FDA and the U.S. Attorney for Rhode Island, not to mention a grand jury.

Google paid a $500,000,000 fine for doing exactly what they are doing with fentanyl–facilitating the sale of illegal prescription drugs to whoever wanted to buy without a prescription.

Not only did Google pay this whopping fine with the shareholders’ money, Google also was sued by its shareholders and settled that case with a commitment to spend big bucks on getting cleaned up.

Google has entered into a proposed settlement agreement with a group of Google shareholders that sued Google’s top executives and board members for breach of fiduciary duty, abuse of control, corporate waste and unjust enrichment.  Google agreed to spend $250,000,000 over the next five years to improve its controls over selling advertising for illegal drug sites (this is in addition to the $500,000,000 fine that Google paid to the government that started the shareholder suit).

Google Inc has agreed to create a $250 million internal program to disrupt rogue online pharmacies as part of a deal to end shareholder litigation over accusations the search company improperly allowed ads from non-U.S. drug sellers.

Google said it would make content about prescription drug abuse more visible and work with legitimate pharmacies to countermarketing by rogue sellers, documents filed in an Oakland, California federal court on Thursday showed.

Google will allocate and spend at least $50 million a year to the internal effort for at least five years under the settlement. The company has also agreed to pay $9.9 million in fees and expenses to plaintiff attorneys.

During the course of the Google Drugs grand jury, Google’s lawyer in the matter, Jamie Gorelick, was able to negotiate a “non prosecution agreement” with the U.S. Department of Justice.  A non prosecution agreement is a kind of plea bargain, although it isn’t really a plea bargain because the defendant has not been charged yet.  It’s the kind of thing rich people or big corporations get so they can keep from being charged with a crime.  You know–getting away with it.  It usually involves the payment of money.  And Google’s case was no different.  Except that they retained Jamie Gorelick who was Deputy Attorney General in the Clinton Administration and was replaced by the Attorney General who approved the Google non-prosecution agreement–Eric Holder.

And as the Wall Street Journal tells us, lawyers for Google told a Delaware court that Attorney General Eric Holder apologized to Google for the U.S. Attorney for Rhode Island’s comments about the case that gave rise to the shareholder lawsuit against Google.

See how that works?  Here’s a pretty picture from the Google Transparency Project:

So both the nonprosecution agreement and the shareholder settlement required Google to clean up its act.  And then along came Mississippi Attorney General Jim Hood to see if they had.

And we know that Google committed to their stockholders that they’ll do better.  That would include Mississippi stockholders who elected their Attorney General to protect their interests and their families.

Jim Hood served Google with a request for information about Google’s compliance with the nonprosecution agreement (the “NPA”) and YouTube’s policies and practices.  That request had questions like these: 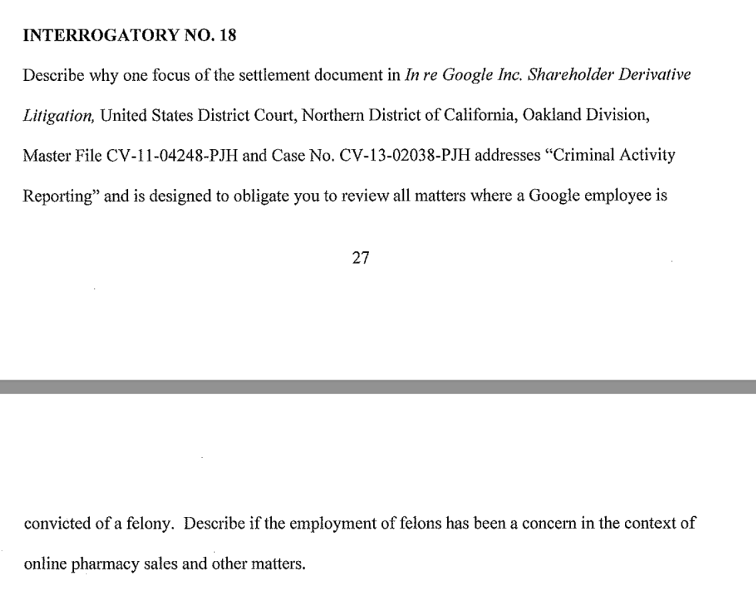 Rather than answer Hood’s request, Google sued Hood to keep from coming clean.  In that litigation, which Hood ultimately won, Google was joined by the Electronic Frontier Foundation as a “friend of the court”–the same people who hounded Prince in the “dancing baby” case.

EFF was arguing that Google should not have to respond to Hood’s request at all, or the criminal investigations of any other state attorney general, and maybe not to the Obama Justice Department.  Do you think the Obama DOJ will do anything to Google?

Will Google ever clean up its act or will it keep facilitating the sale of illegal drugs?  That answer is pretty obvious.