Google and Amazon are the first two vastly wealthy multinational media companies to enjoy the Librarian’s collaboration.  These two companies are currently exploiting a copyright law loophole to sell the world’s music without paying royalties to the world’s songwriters on millions–millions–of songs.  How?  A process that starts with buying from the Library of Congress a data file that contains some of the post-1978 copyright registrations and other recorded documents–and by paying a hefty fee to the Library of Congress.

It’s not exactly a back door purchase, but you have to know who to ask (Bonita Brown at bobr@loc.gov) and you have to know what page it’s on.  We asked the research desk at the Library of Congress and they had no idea what we were talking about. 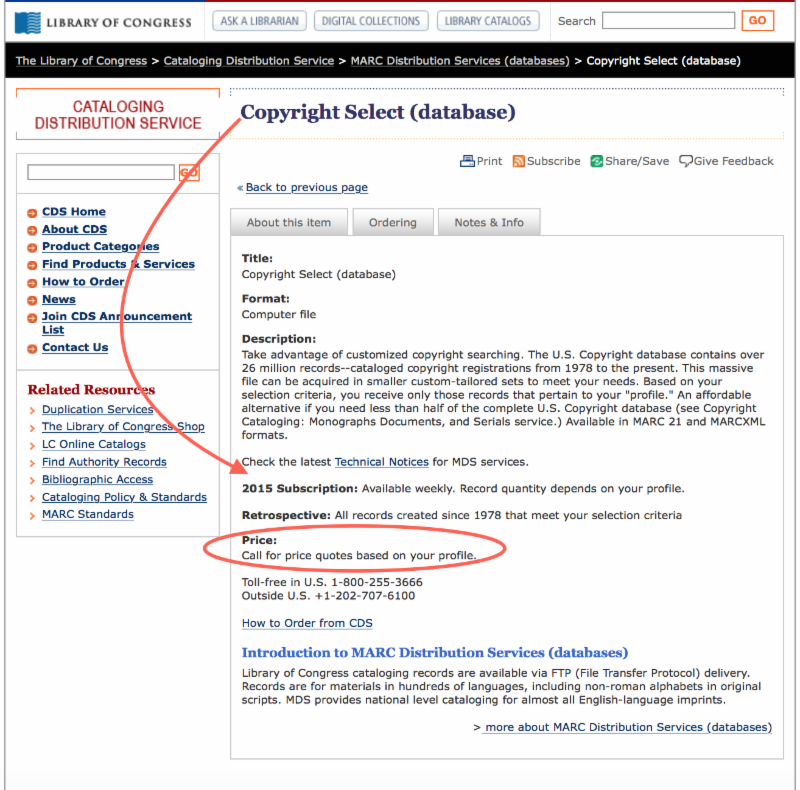 And here’s the page for the massive database of post-78 documents: 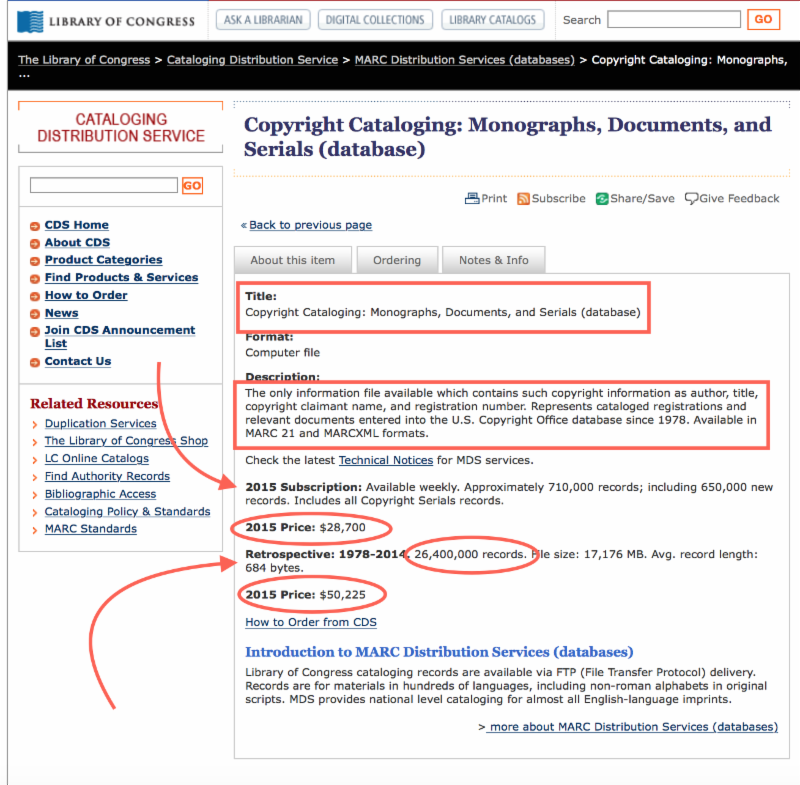 And here’s the scam:  Users of the compulsory mechanical license have to send a “notice of intention” to the song copyright owner (“NOI”).  Finding that copyright owner is usually a process of song research in readily available databases.  In Google’s case, this would include Google’s own Content Management System and data it acquired in its purchase of Patrick Sullivan’s company Rightsflow (which is essentially a snapshot of the Harry Fox Agency database that was either sold to Rightsflow or came under its control some other way).

However–in a remnant from the 1909 Copyright Act that required registrations in order to enjoy the rights of a copyright owner, Google need not look further than the public records of the Copyright Office in order to comply with the search requirements of the compulsory license.  Even if Google has actual knowledge of the song owner’s contact.

Reflect on the phrase “Google can’t find the song owner.”  The largest purveyor of other people’s information in commercial history cannot find someone?  Sound like moral hazard?
Here’s an example in Google’s filing of “Fragile” by Sting.  Google is claiming that it can’t find Sting and that there’s no Copyright Office filing for “Fragile (Live”.  Aside from the fact that Google probably has a direct publishing license for Fragile through Sony/ATV-EMI, it is patently absurd to register an address unknown NOI for “Fragile”.

The reason Google gets away with it is due to the negligence of the Librarian of Congress.  The Librarian allows this scam to get started and has no controls in place to determine if Google and Amazon are even entitled to the filings which they are clearly not in Sting’s case.  And it clearly isn’t just hit songwriters–it’s mostly the little guys who are being bullied by Big Government and Big Tech.

If Google can’t find the song owner (as determined by Google, not by the Library of Congress), the law allows Google to send that NOI for the unfindable song owner to the Copyright Office.  And Google and Amazon are sending these “address unknown” notices to the Copyright Office in the millions at great expense to the taxpayer because the filing fees for NOIs can’t possibly come anywhere near covering the cost of the processing.

Why are Google and Amazon doing this?  One reason is that by filing the NOIs, they do not have to pay royalties until the songwriter identifies themselves in the Copyright Office system, they cannot be sued as infringers, and they cannot ever be audited.

I happened to speak to a representative of one of the mass NOI filing companies after a recent panel in Los Angeles who assured me that the reason that his clients were filing these NOIs was not because they did not want to pay royalties but because they were so worried about liability from a “Jeff Price jihad” and that his clients fully intended to pay royalties retroactively once the song owner became known unlike the record companies who are “thieves”.

I believe that he believes that his client believes that they’re just trying to avoid being sued for not having the rights, but humor this unbeliever.  My bet would be that getting that retroactive payment will take the effort worthy of an act of Congress.

If his new boss clients had a reputation for or history of treating creators fairly, I’d be far more inclined to bet on sunshine and puppy dog tails, but they don’t so I won’t.  The problem would be easy to solve–all they would need to do is issue a press release or even a blog post on the Google Public Policy blog stating that it is the official position of the company to pay retroactively.  Even if you accept his premise that record companies and music publishers are “thieves,” they never filed millions of NOIs.  In the meantime while we’re waiting for that post, I think we have to act as if it is not coming.

But what is really clear is that the Librarian of Congress is turning a blind eye to this abuse, and is even aiding and abetting this overt attack on songwriters by selling the crucial data.  Not to mention injecting the Library into picking winners and losers in ongoing class actions.

Another problem with the Librarian’s position is that there is a real possibility that permitting the mass filings of millions of NOIs for foreign works may very well violate international copyright and trade treaties and could land the U.S. back in a WTO arbitration at great cost to the taxpayer.

So another debacle by the Librarian of Congress that really hurts songwriters, exposes the U.S. taxpayer to great costs and for which the government is entirely unaccountable unless Congress exercises its oversight authority through the House Committee on Administration and finds out what is going on over there.

For more detail on government complicity in the mass NOIs, see this three part post.