It is axiomatic that as government expands, liberty contracts. Songwriters are among the most highly regulated workers in America, so on the continuum of liberty, guess where songwriters score? Most people are surprised by that unadulterated, and rather bleak, fact. After all, songwriters don’t make anything toxic or build in places they shouldn’t or dump chemicals in a waterway. Songwriters don’t have monopoly power. Songwriters don’t even get to set their own prices—the government largely does that in a very expensive and Kafka-esque process. They just write songs.

Why is this important now? Because the Congress has conducted a “review” of the laws affecting songwriters and it’s possible that the Congress now is about to actually do something in the waning days of the current session of Congress. For songwriters, the holiday season is a good time to remember the most terrifying words in the English language: I’m from Washington and I’m here to help.

The Royalty that Time Forgot

The Sovereign compels songwriters to license their songs in two principal ways: The compulsory license for “mechanical” copies (Section 115 of the Copyright Act) and the rate courts (under a 1941 consent decree for ASCAP, the longest running consent decree in history, and a comparable one for BMI dating from 1964). The government set the mechanical royalty rate for the compulsory license at two cents per song per copy in 1909 and then forgot to raise it until 1976 when in its largesse, the Sovereign raised the rate to 2.75 cents per copy—inflation alone would have put the mechanical at 12 cents in 1976. That shadow of that injustice has dogged songwriters ever since and to this day.

Imagine for a moment if the Sovereign had set any other wage in 1909 and then forgotten to raise it for 67 years.

Today that same rate is 9.1 cents where it was set and forgotten in 2006—eleven years ago. So songwriters live in the shadow of that “minimum” statutory rate for which they never got relief from the Sovereign.

The main threats to songwriters from Washington come from one bill and the failed administration of two agencies: The Copyright Office and the Department of Justice. All these threats emanate from what is likely the largest lobbying cartel in history, the “MIC Coalition” an organization created for one purpose in my view: to crush songwriters once and for all. The MIC Coalition seems devoted to fixing prices for songwriters at zero or as close to zero as they can get them as far as I can tell. 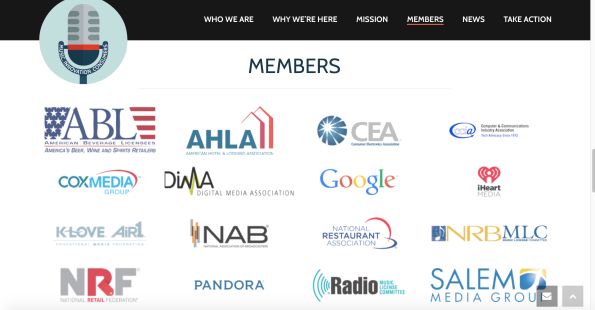 The bill in Congress is the proposed Transparency in Music Licensing and Ownership Act (HR 3350) which is fully backed by the biggest of big businesses (MIC Coalition) to the detriment of the smallest of small businesses (songwriters). This legislation would impose yet another formality on songwriters by creating a massive database that would supersede the current copyright registration system for one purpose—denying songwriters the right to sue for statutory damages and attorneys fees in cases of copyright infringement. According to this legislation, if your song is not on the government’s list, then you can’t use the one big stick to drive compliance with the Sovereign’s own rules governing compulsory mechanical licenses.

Why is that? Because you are most likely to be suing a member of the MIC Coalition, or more precisely suing a member of one of the several trade association members of the MIC Coaltion—the DIgital Media Association (or “DiMA” in the logo above). The Digital Media Association is comprised of Amazon, YouTube, Apple and Spotify among others and has long been a stake in the side of the creative community. That’s right—one trade association member of the MIC Coalition represents three of the biggest corporations in the commercial history of the United States.

One alternative to statutory damages would be for the Department of Justice to assume a greater role in the enforcement of the copyright law. But the MIC Coalition has no intention of allowing that. No, no, no. The plan is to create a Gargantuan “gotcha” in order to take away statutory damages and attorneys fees as a right of any copyright owner to sue and replace it with….nothing.

It is well to remember that the U.S. Copyright Office is a pre-New Deal legislative branch agency that has none of the civil or criminal enforcement powers we have come to associate with post-New Deal regulatory executive branch agencies. While the Copyright Office issues regulations, the Sovereign predominately leaves the enforcement of these rules to creators, publishers and labels to enforce at great expense. This is the one place that the Sovereign seems to want the market to work—the part where the Sovereign abdicates its primary purpose, that of protecting the people. Like I said, the desert tortoise fares better than the songwriter.

And who is filing these notices and paying these fees? Google, Spotify, Amazon, iHeart, Pandora—all members of the MIC Coalition price fixing cartel. Think that’s a coincidence? Using this loophole, these corporate giants pay a zero royalty for their compulsory licenses. Hence, the cartel attempts to fix the price for songs at zero or as close to it as they can.

The Copyright Office permits these filings to occur and to my knowledge has raised no objection to it. They are unmovable on this point while they watch songwriters burn down. (I have a longer article on this “address unknown” issue here.)

The Department of Justice is currently engaged in a massive charade called “100% licensing”. This new and abrupt change in the way the DOJ interprets the ASCAP and BMI consent decrees was brought about under the auspices of a former outside lawyer for Google who was installed as a senior official in the antitrust division of the DOJ. What this interpretation means is that on co-written songs, the longstanding practice of each songwriter on a co-write administering their share of the song is thrown out the window. Instead, each songwriter is required to license 100% of the song, including their co-writer’s share. (Recall that Irving Azoff challenged Google by forming Global Music Rights and requiring a separate license for his writers who withdrew from the government-regulated PROs.)

The BMI rate court judge ruled against the DOJ—but the Sovereign is now appealing that ruling. The DOJ’s handling of the situation was so bad that songwriters actually sued the DOJ.

What is to be Done?

First—the DOJ should drop the appeal of the BMI rate court ruling against 100% licensing.  It’s a waste of time and creates substantial hostility among songwriters.

Second—the Copyright Office should stop accepting address unknown filings and refer the matter to the Congress to close the loophole. Digital services could also refuse to post recordings for which they have no publisher information, which is action most likely to produce unknown information from the market.

Most importantly—the Congress should not introduce yet another distortion in the market with some unicorn database that will never work.

As we approach the season of hope, it is well to echo what songwriters and publishers have told Congress for years: Songwriters need more liberty, not less.

3 thoughts on “Will Congress Bring Songwriters a Lump of Coal or Justice?”