As the Google Transparency Project reports, Digital Media Association heaveyweight Google and its incumbent cronies like the Electronic Frontier Foundation, Engine Advocacy, the Center for Democracy and Technology, NetChoice and the Consumer Technology Association are out for blood to keep the legacy Communications Decency Act from being dragged into the 21st Century. 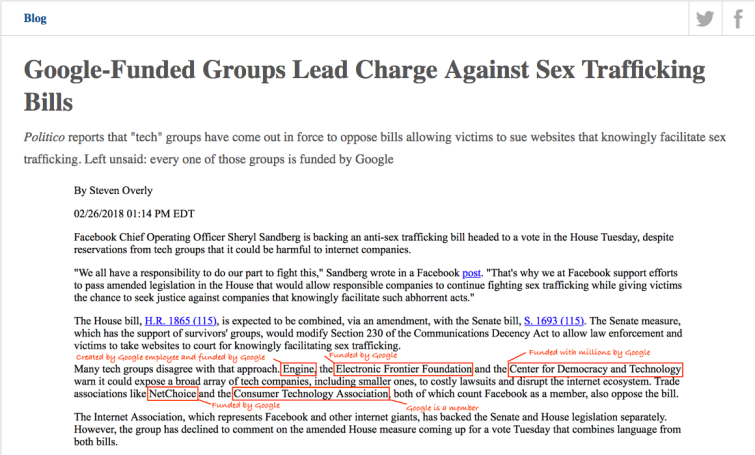 Miraculously, Google’s lobbying millions were no match for strong grassroots support behind Chairman Bob Goodlatte that got the much needed reform legislation over the goal line.

Here’s the press release from the House Judiciary Committee:

The House of Representatives today passed the Allow States and Victims to Fight Online Sex Trafficking Act (FOSTA), a product of the House Judiciary Committee. This legislation provides restitution for sex trafficking victims and enhances criminal penalties for websites that facilitate illegal prostitution or sex trafficking.

Chairman Goodlatte: “Over the past year, the House Judiciary Committee has worked directly with prosecutors to understand how new legislation could help them enforce existing laws and hold bad actors accountable for sex trafficking online. We have also explored changes to the criminal code that would disincentivize websites from knowingly promoting or facilitating illegal prostitution. The summation of the Committee’s investigative work is FOSTA, a bill that gives restitution to victims and creates harsher penalties for bad actor websites that facilitate horrendous criminal acts. I believe the provisions in this legislation will make the internet safer and give victims the criminal and civil means to punish wrongdoers and move forward with their lives.”

Background:
What FOSTA does:

The House Judiciary Committee last year held a hearing to review the impact of the Communications Decency Act on sex trafficking online. In December 2017, the Committee approved FOSTA by voice vote.