It’s still early days for the Spotify public offering (more correctly called a “DPO” for “direct public offering” but since no one knows what that means, I used IPO in the headline).  But sure as a $50 handshake, interesting patterns may be developing in the basic trading elements of price and volume, courtesy of Yahoo Finance: 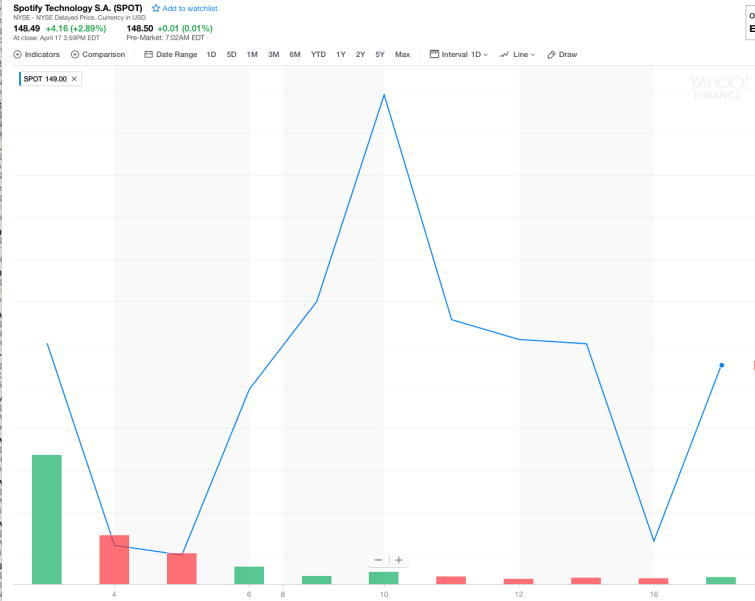 Remember that the “direct listing” was supposed to confer various benefits to Spotify.  You know, that old canard about saving money on underwriter fees, the evil “bankers” who everyone hates, right?

But look at this chart and ask yourself if this behavior bears any resemblance to what a “normal” underwritten IPO would behave like.  I would offer that what this chart behaves like is something else–the preferred stock of a takeover target following a tender offer when preferred holders already know what the price is ultimately going to be for for their shares.  In that scenario, there is a price that is not set by traders of the shares that the shares revolve around reflecting a risk that gets lower every day closer to the closing of the transaction.

The point of the analogy being that traders already know the ultimate price they will get for their shares.  So you see low volume and a price fluctuation around a range.

In the case of Spotify, the opening price was set by a manipulation of a special ruling by the Securities and Exchange Commission that allowed Spotify to use its last trade as a private company for its first trade as a public company–as though there were some connection between these things.  There really isn’t much of a connection.  You can’t say there’s no connection, but there are so many distortions in the price and valuation of this particular private company (Tencent, large convertible debt, down round avoidance, no insider lockups, etc.) that there isn’t a whole lot of connection between the private and public valuation.

By setting its IPO price at $165.90 and a relatively small number of shares in its “float“, it was entirely predictable that Spotify would trade at a low volume at that price range (even though it closed down 20 on its first trading day).  Despite the customary restrictions on insider selling not being in place (the “lockups”), there still have to be buyers to match to the sellers.  At a $100+ price point for a company that lives high on the hog while losing the stockholders money hand over fist, it’s clear that Spotify is not directing its shares at a retail customer who will ask one question.

What do I sell to buy SPOT?  The answer–in a world where you can buy a share of Apple for roughly the same price on a down day–probably nothing.  Which I think is a fair explanation of why SPOT volume is so low.  An absence of buyers, especially retail buyers.

One other measurement of sentiment:  Short selling.  With a low number of shares trading and no underwriting syndicate, there are fewer places to go to borrow the shares.  Although put options at a $100 strike price are already available.

As you can see from the chart, after the first week of trade, the volume has settled into a pattern of approximately 1.5 million shares trading daily.  Whether these are real traders, market making activity by the company’s insiders or some combination remains to be seen.  But at this rate, it’s going to take a very long time for insiders to sell their shares.

Of course, if anyone wanted to sell a block of shares, all they’d have to do is price the shares at a lower share price, which might cause trading to pick up at a more realistic price point.

But anyone who did that would probably not be too well received around the kale bar or whatever is is they have at Spotify.  Because it sure seems that all the Spotify insiders, like the takeover’s preferred holders, already know the price they are expected to sell at. Or maybe they just know something we don’t.

Time will tell but it’s worth watching.  For a lot of people.