It remains to be seen how the legislative process on Article 13 will play out but it’s very clear what the European Parliament’s next step is–investigate how American multinational corporations attacked a duly elected government.  The European Commission is foreshadowing this crucial next step in its official, undeniable and detailed condemnation of Google’s lobbying tactics.  (See The Copyright Directive: how the mob was told to save the dragon and slay the knight on the EC’s official blog.)

Bear in mind that these techniques have been used by Big Tech for many years as I have documented.  But it must be said that Google and Facebook have hit a new low with Article 13 and the Parliament should not let it go back to business as usual.  What is unusual about the Article 13 campaign was that it simply was repeated versions of Plan A–carpet bomb the MEPs with automated emails (aka spam) and pretend that these fakes were the voice of the people. 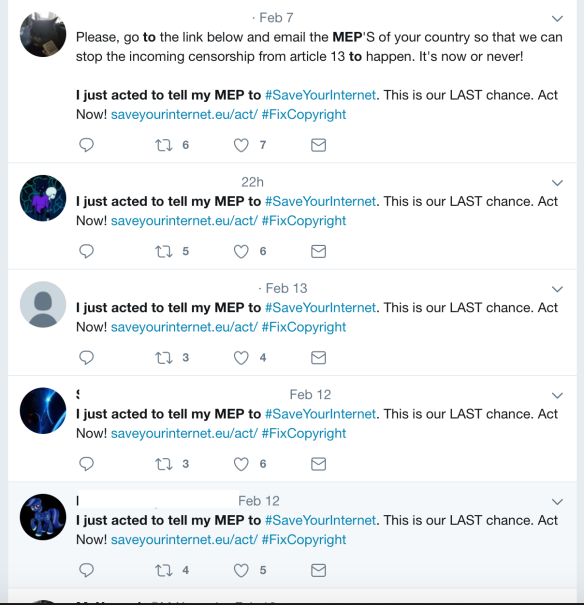 Many of these Twitter accounts behaved in a manner that is similar to the Russian bots that all these social media companies have told the U.S. Congress and the UK Parliament that they are taking steps to control.  If that’s true, it should be clear that when Jack Dorsey bats his stock options at the Congress about how seriously they take the problem, they don’t seem to take it very seriously when it is Big Tech’s interests on the line.

Twitter should have caught all this behavior given their supposed interest in stopping the Russian bot farms.  It’s hard to know exactly what the game was with these accounts the way that Twitter could tell the MEPs in, say, an investigation.  Under oath.  But we can guess based on the old Twitter ratioing techniques.

There are hundreds if not thousands of accounts that all have some common traits–very high numbers of likes, very low numbers of followers and all making a clear effort at riding an emotional contagion that social media is designed to exploit.

There is a real problem with governing-by-contagion and public officials are investigating this very thing with the Russian bots that bear a striking resemblance to Google’s Article 13 campaign.

But this problem isn’t news–for example, Cass Sunstein, then the Administrator of the Obama Office of Management and Budget, issued a memo in 2010 to the heads of executive branch departments and regulatory agencies which dealt with the use of social media and web-based interactive technologies.

Specifically, the Sunstein memo recognized the attraction to social media for policy making:

To engage the public, Federal agencies are expanding their use of social media and web- based interactive technologies. For example, agencies are increasingly using web-based technologies, such as blogs, wikis, and social networks, as a means of “publishing” solicitations for public comment and for conducting virtual public meetings.

But Sunstein called for exercising caution with public consultations.  He warned that “[b]ecause, in general, the results of online rankings, ratings, and tagging (e.g., number of votes or top rank) are not statistically generalizable, they should not be used as the basis for policy or planning.”

The European Parliament would do well to take a page from Sunstein’s thinking.

But the most important thing for the European Commission to take into account is that a company that is the target of multiple investigations is using the very market place monopoly that caused the competition investigations to begin with.

And Google is doing it to intimidate the European government into bending to its will on Article 13.  I’ll say it again–the European Commission needs to launch a full-blown criminal investigation into exactly what happened on Article 13.