We’re starting to see a narrative emerging from the digital music services in reaction to artists chafing under the misery of streaming royalties.  Streamers want lawmakers to focus attention on the allocation of current period revenue that they pay to creators and deflect attention from the company’s stock market valuation (or private company valuation).  That’s a grand deflection and misdirection away from the true value of artists, songwriters and their recorded music to streaming companies like Spotify.  But they can’t escape the embarrassment of riches by discounting the value of stock price through deflecting attention to loss-making revenues that companies like Spotify keep artificially low through a kind of Malthusian reverse pricing power to drive growth.  It may be rational for investors, but it’s not sustainable for the creators of the company’s sole or primary product.

We saw this with Pandora–lawmakers were told how much of Pandora’s monthly revenue the company paid out in royalties as though revenue was the primary metric.  The deflection worked until lawmakers started realizing that Tim Westergren was booking $1 million a month in stock sales.  Then it rang pretty hollow.  But the commoditizers are at it again.

No matter how much Big Tech tries to commoditize music, this is not about selling widgets at a deep discount–it’s about people’s lives.

Let’s be clear–companies like Spotify don’t get into business to eke out a profit.  They get into business to get their snouts into the trough of IPO stock as fast as possible and share that wealth with as few people as possible.  (And get out of corporate governance before the chickens come home to roost.)  So looking at revenue allocation without the accretive boost of stock market valuation is simply a grand deflection.  Abracadabra!

That deflection is particularly galling when the executives dip into current revenues to reward themselves like drunken sailors.  This is the profit fallacy—I would go so far as to say that in Silicon Valley, “profit motive” is very 1980 and long ago was replaced by the motive of  “get big fast.”  These companies seek to capture public stock market valuation, and share price valuation implies a belief in top line earnings and market share growth–not current period profit or–God forbid–dividends to shareholders.  And “get big fast” is working for Spotify.

There is also controversy about a perceived “allocation” of music royalties payable by the streaming services particularly between record companies and recording artists or PROs and songwriters (especially the PROs and authors’ societies that Silicon Valley would dearly like to replace).  The allocation theory again focuses on revenue instead of the total value transfer. It goes something like this: Streaming services pay 69¢ of each dollar for royalties. When the artists or songwriters complain, it’s not because the saintly streaming services don’t pay enough, it’s because the greedy record companies or PROs take too much of that 69¢.

There is a lot that is not said with that fallacious allocation statement. I think a focus on revenue “allocation” is the wrong way to look at the royalty issue from a policy perspective.  The “allocation” focus presupposes there is an aggregate payment for music that is somehow misallocated.

This allocation or “pie” fallacy is a very familiar argument in the U.S. It often comes from broadcasters fighting equitable remuneration for recording artists on terrestrial radio by attempting to limit their total payment for both sound recordings and songs to the amount that broadcasters historically have paid for songs only.  Instead of acknowledging the value of sound recordings, the platforms confound song performance royalties with “music”.  They say, “We pay $X for music, we don’t care how you allocate it between songs and recordings.”  This is like comparing apples to oranges and producing a pomegranate.

I call this thinking the fallacy of the pie, a derivative of the fallacy of composition.  It makes creative sectors fight each other in a kind of digital decimation.

There is nothing particularly sophisticated about this strategy.  But the policy challenge for industrial strategists is to how to grow the pie, not to cut smaller pieces for everyone.  Growing the pie is particularly relevant when the platform seeks to monetize its valuation in the public financial markets. At that point, focusing solely on the allocation of revenue to the exclusion of the total valuation transfer is simply a kind of cruel joke.

Here’s the sad reality broken down to current per-stream rates that are entirely based on service revenue:

This is front of mind as we see reports of Believe Digital (owner of the independent pre-pay distributor Tunecore) contemplating a €2 billion IPO drafting behind the reported COVID-fueled success of streaming and the Spotify public offering.  Government may play a role in requiring a share of riches transferred from the public financial markets to be shared by those artists and songwriters who gave the issuer its valuation, particularly when the issuer did not invest in the creative community.

If profit were really the target, one could make Spotify more profitable almost overnight by moving their U.S. headquarters to Syracuse, Cedar Rapids or even Austin rather than multiple floors of the World Trade Center in Manhattan.  One could cut executive compensation, one could do many things to reduce their Selling, General and Administrative costs.  But profit is not the issue for them.  Valuation is the issue and valuation is driven by bets on future growth.   In Spotify’s case, growth is often measured as subscriber growth and subscriber growth implies competing on price because Spotify offers more or less the same product as its competitors in a triumph of the commoditizer.  Which in turn implies keeping retail prices down (and Monthly Service Revenue) in a race to the bottom on subscription price and to the top on share price.  You may find that analyzing the economics of who wins in streaming is similar to who wins a gas war among price cutting petrol stations.

COVID has nearly destroyed the live music business that sustained the artists who previously tolerated their mils per stream Spotify royalties.  Far from being harmed by COVID, COVID has been rocket fuel for Spotify which adds to the unfairness of the “big pool” revenue share royalty system.  As the COVID Misery Index demonstrates, Spotify’s growth in valuation has outpaced its fellow oligopolists: 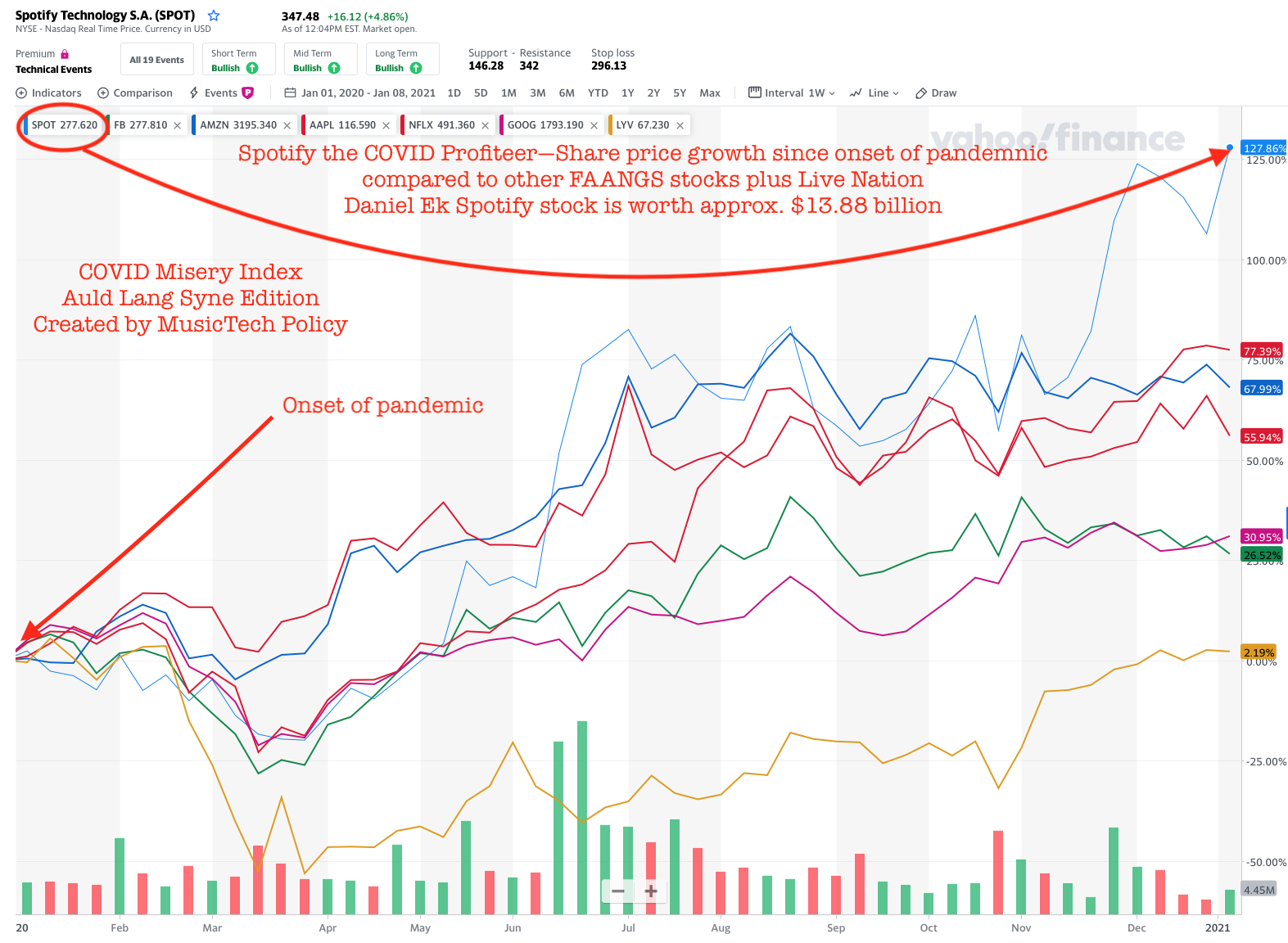 Given the urgency of the COVID crisis, it is important to understand the difference between the creator community and other workers affected by COVID.  For example, restaurants are not failing while some other entity succeeds in extracting value from their customers.  As the COVID Misery Index demonstrates, Spotify’s stock price has more than doubled since the onset of COVID.

Again, Spotify’s success is largely predicated on keeping both royalties and prices low and bargaining for special royalty treatment.  I don’t object to the company’s pricing decisions so much as the complete failure of Spotify to share its success with independent artists who make up a significant amount of its offering but who are doomed to scrap at the decimal point in search of a positive integer.

Instead of launching billion-dollar stock buy-back programs to juice their share price, it would be a simple thing for Spotify to credit the royalty accounts of independent artists and songwriters with a cash infusion not connected to the revenue share deflection.  They have a direct billing relationship with thousands of artists and songwriters and they could simply deposit some thousands in these accounts which overnight would help balance the inequities and also provide an alternative to government support payments.  We have experienced government payments to creators in Austin, and one of the biggest problems was the mechanics of getting the money from the government’s account into the creator’s account.

Spotify could just do it today as a thank you for doubling the value of their company while artists and songwriters suffered. Or perhaps Daniel Ek could just pay it out of his own pocket since he loves creators so damn much.

Whether it’s driven by the embarrassment of riches or a guilty conscience, the commoditizer’s grand deflection is back. Don’t let them fool you twice.

One thought on “Streaming and the Embarrassment of COVID Riches”